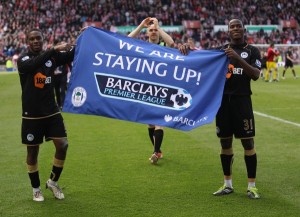 If you want to know what you can expect from title contenders and mid table sides, then check part 1 and part 2 of our annual season preview, but the final part is reserved for sides likely to enter the difficult relegation tussle. Reaching the 40-point mark that is almost always enough for survival could prove to be tough with the competition fiercer then ever. After Swansea, QPR and Norwich all survived the previous league campaign, it remains to be seen whether the newly promoted sides can do something similar this term.

Swansea were clearly one of the surprise packages last season with the whole of England impressed by Brendan Rodgers’ side. The talented manager is now gone, as are Gylfi Sigurdsson, Joe Allen and Steven Caulker, so many are wondering whether the Swans will be the next side to suffer from the second season syndrome. While they certainly cannot be expected to repeat the 11th-place finish from last season, I believe that Swans have more than enough quality to survive the drop, especially having signed some very good players in De Guzman, Chico and Michu. Michael Laudrup will have an excellent chance to prove his coaching credentials in the Premier League and his side are expected to survive the drop without too many problems.

Pick: Swansea to stay up

Wigan may have spent much of the previous league campaign fighting for their lives, but the impressive run in the season finale proved the Latics deserve a mid table finish. The club chiefs have done brilliantly to keep hold of Roberto Martinez, arguably one of the best managers in the elite division, while the squad are very similar to that from last term. Team’s attacking department could suffer a bit after Victor Moses and Hugo Rodallega both left, but Jordi Gomez and new signings Arouna Kone and Ryo Miyaichi are expected to compensate for the departures. While the Latics may struggle to finish the season in top half of the standings, Premiership survival should never come into question.

Pick: Wigan to stay up

Despite the heavy investment in the playing squad, QPR barely survived last season, but the club chiefs have made sure the team avoid another similar scenario. Green, Nelsen, Park, Fabio, Johnson and Hoilett all arrived to improve the quality of the side, as a result of which the Rangers look well prepared for the survival fight. Their back line is still a bit short on quality, but that is nothing one or two signings can’t change. Boasting a strong starting line-up as well as several impact players on the bench, Queens Park Rangers should be able to finish the league campaign at least few places above the relegation zone.

West Ham didn’t need a lot of time to return where they belong and the Hammers further reinforced what were already a very good side this summer. With Sam Allardyce at the helm and seasoned Premiership players like Kevin Nolan, Mark Noble, James Collins, Matt Taylor and Carlton Cole in the side, the Hammers need not worry about relegation tussle as they could easily avoid the difficult fight. This team will need no extra time to gel, while Modibo Maiga, a new signing from Sochaux, could prove to be the buy of the season for the Boleyn Ground outfit. Taking everything into consideration, West Ham are much closer to mid table finish than relegation.

Nobody was surprised to see Southampton return to the top flight following a seven-year absence, but the lack of transfer activity in the summer was a bit surprising. With just three new players and very little Premiership experience in the squad, the Saints will struggle to cope with the demands of the Premier League and could easily go down. There are no doubts that boss Nigel Adkins has a very talented squad at his disposal, but the lack of experience could end up costing his side Premiership survival. You can expect some dazzling performances from the likes of Rodriguez, Lallana and Lambert, but I seriously doubt that will be enough for the Saints to survive this season. The club chiefs will rue the fact that they didn’t do more to reinforce the squad over the summer.

Pick: Southampton to go down

Reading proved their worth by beating Southampton and West Ham to the first place in the Championship, and the club have done well to reinforce the squad over the summer. Pavel Pogrebnyak, Danny Guthrie, Chris Gunter and Adrian Mariappa should slot right into the starting line-up, and the Royals are certainly expected to put up a decent challenge this season. However, I am pretty confident they will not be able to avoid the relegation struggle and could eventually lose the survival fight to some more experienced Premier League sides. It appears that Reading have 50-50 chance of staying alive, meaning there is a good value in backing the Royals for a straight return to the Championship.

Pick: Reading to go down

Norwich largely impressed in the previous Premier League campaign, finishing the season tied on points with tenth-placed West Brom, but with boss Ricky Lambert now gone, they could become another casualty of the second-season syndrome. The Canaries were punching way above their weight and cannot be expected to repeat another such season, so a difficult relegation tussle is likely to become a reality for them. Veteran striker Grant Holt has been absolutely amazing last season, and now Robert Snodgrass has been brought to help him up front, so the attack looks ok, but other areas of the team are a bit short on quality. With little or no strength in depth, Norwich could be in big problems if several starters are not available at one point in the season.

Pick: Norwich to go down