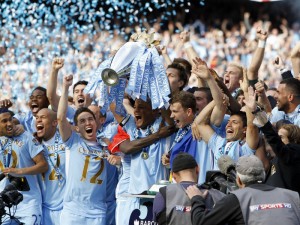 The 2012/2013 Premier League season gets under way and our traditional season previews return to give you an insight into team’s camps and all the off-season developments you might have missed. First part of our season preview is dedicated to title contenders and top 4 hopefuls, whereas remaining teams will be featured in part 2 and part 3 of our English Premier League Season Preview.

Having won one of the most exciting Premier League campaigns ever, Manchester City now prepare for the title defence, and many an online bookmaker see the Citizens as the hot favourites for the coveted trophy and for a good reason. The team seem to have finally clicked, with even Carlos Tevez and Mario Balotelli showing they are willing to work hard for team’s cause. Roberto Mancini has done well to keep hold of fringe players Edin Dzeko, Aleksandar Kolarov, Nigel de Jong and Adam Johnson, as these may just play a crucial part when some of the starters are unavailable for selection. With so many quality players in the side and a huge strength in depth, Manchester City look set back to back Premier League titles.

Manchester United may have lost the Premier League title after squandering an eight-point lead in the season finale, but the mere fact the Red Devils finished the league campaign tied on points with Manchester City was a huge success if we take a look at the squad Sir Alex Ferguson had at his disposal. With Nemanja Vidic and Tom Cleverley back in action and Robin van Persie and Shinji Kagawa also in the side, United look better prepared for the title push, but I have a feeling they will come short for the second successive season. The Red Devils once again lack strength in depth and that could prove to be a major issue in the second part of the season. The second-place finish, however, should never come into question.

Chelsea shocked everyone by turning their season around to win Champions League and FA Cup titles, with the two trophies more than compensating for the 6th-place finish in the Premiership. Boosted by such a strong finish to the season, Roman Abramovich not only handed a permanent deal to Roberto Di Matteo, but also splashed the cash on Eden Hazard, Oscar and Marko Marin, thus adding more fresh blood and plenty of quality to the squad. As a result, the Blues now have a very balanced squad and a decent strength in depth, so we certainly expect them to mount a serious title challenge. Chelsea could eventually lose the battle with the Manchester rivals, but they are the team to beat when it comes to 3rd-place finish.

Pick: Chelsea to finish in top 3

The entire Arsenal fan base is blaming Arsene Wenger for rubber-stamping the sales of Robin van Persie and Alex Song, but that doesn’t mean the Gunners will be necessarily weaker than last season. Santi Cazorla has already shown he will be a brilliant addition to the squad, while Olivier Giroud and Lukas Podolski should follow in his footsteps once they fully adapt to the new surroundings. With Jack Wilshire, Bacary Sagna and Abou Diaby slowly returning into action, Arsenal will have a formidable squad this season and I am pretty positive they can ensure another top 4 finish. The quality is there, the talent is there, while the strength in depth is also not missing.

Pick: Arsenal to finish in top 4

For the second summer running Luka Modric saga is upsetting pre-season preparations at Tottenham and not knowing whether your key player will stay or not must be a bother for new boss Andre Villas-Boas. But, that is not the only problem at the moment. The return of Emmanuel Adebayor from Manchester City should help Spurs become more dangerous up front, but that could mean another season on the bench for impact striker Jermain Defoe. However, with Jan Vertonghen and Gylfi Sugurdsson arriving in the summer, and Tom Huddlestone and Michael Dawson recovering from injury, Tottenham seem to have enough quality to finish between 5th and 7th place in the standings.

Liverpool chiefs have made the right decision in appointing Brendan Rodgers to succeed King Kenny, but the new boss wasn’t given the backing he expected to. Joe Allen, Fabio Borini and Oussama Assaidi have arrived at Anfield, but there is still a clear lack of quality players in the side. The Reds could decide to add few more players by the time the summer transfer window ends, but I don’t think they have what it takes to mount a serious top 4 challenge. I am positive Joe Allen will prove to be a great signing for the club, with the other two signings could need some time to show they deserve to be playing at this level. Given that Steven Gerrard is not looking his usual best at the start of the season, top 6 finish is the best the Reds can achieve this term.

Pick: Liverpool to finish in top 6

Following the breakthrough season Newcastle need to ensure they don’t return to mid table mediocrity this term, with the Europa League campaign likely to make their job even more difficult. Having kept the team together, the Magpies are expected to mount another top 6 challenge, but finishing above Tottenham, Liverpool or even Everton will not be an easy task. If Papiss Cisse and Demba Ba both find their scoring touch at the same time than anything is possible, and if not, the Magpies should still have enough in them to finish in top 8. Vurnon Anita and Romain Amalfitano could prove interesting signings.