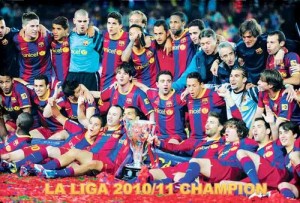 After discussing the chances of title contenders and mid table sides in part 1 and part 2 of our season preview, now it’s time to pay attention to the relegation strugglers. No less than eleven teams feared they could go down before the final La Liga round and I expect another very interesting relegation struggle. Newly promoted sides Betis, Rayo Vallecano and Granada face a tough task after coming from Segunda, but few other established La Liga sides could enter the survival fight as well.

Racing Santander managed to survive last league campaign despite losing their final two games of the season, and they again look likely to enter the relegation battle. New owner Ali Sayed was expected to pump in some money into the squad, but that did not happen, meaning that new coach Hector Cuper inherited a pretty limited squad. Important midfielder Mehdi Lacen joined Getafe, whereas Lautaro Acosta and Alexandros Tziolis were brought to improve the quality of the side, but we have yet to see the results. Racing were utterly disappointing in pre-season, which is hardly a surprise when we know that important players Gonzalo Colsa, Kennedy Bakircioglu and Pedro Munitis are well past their prime. All things considered, this will be a very difficult season for Racing and I certainly wouldn’t be surprised if they get relegated to Segunda.

Pick: Racing to get relegated

Real Betis return to where they belong after spending two seasons in Segunda and everybody at the club are determined to help the team avoid another relegation from the top flight. As expected, los Verdiblancos have been very active in the transfer window, signing some very good players, such as Roque Santa Cruz, Javier Chica, Javier Matilla, Ustaritz and Dusko Tosic, although they did stay without star player Achille Emana. Pepe Mel’s side showed a lot of promise in pre-season, with goalless draw against Juventus in their final preparation game showing the team are fully prepared for the upcoming season. The opening win over relegation rivals Granada could be a sign of things to come and even though Betis are likely to enter the relegation race at some point, they certainly have enough quality to avoid the drop.

Osasuna did well to avoid relegation last term, having spent big part of the league campaign in the bottom three, with four wins in last five games helping los Rojillos avoid the drop. Having undergone major squad changes this summer, Osasuna could need some time to hit the ground running, just like last season, but when things fall into place they should be all right. The departures of Nacho Monreal, Javier Camunas and Walter Pandiani have left a big gap to fill, but the club added some very good players to the side, such as Marc Bertran, Ibrahima Balde, Nino, Jukka Raitala, Raul Garcia and Ronald Lamah. The opening draw at Vicente Calderon against severely reinforced Atletico Madrid hinted that Osasuna will be a hard team to beat this term, and taking into account their good showings in pre-season, I believe los Rojillos will survive this season as well.

Pick: Osasuna to finish above Racing

After spending two years in Segunda, Levante managed to return to the top flight and they defied the odds to ensure survival last season. Los Granotes looked like the main candidates for the drop after the first part of the league campaign, but their impressive run of results that lasted from February to April saw the team ensure survival well before the final round. However, things are not looking good for Levante at the moment as they not only stayed without coach Luis Garcia, who led the team to unimagined heights, but top scorer Felipe Caicedo also left, leaving los Granotes really short of quality in attack. The club have signed quite a few new players to try and create a competitive squad, but with such limited funds at their disposal, even Liverpool flop Nabil El Zhar is seen as a major coup. Despite some interesting results in pre-season, Levante look like the main candidate for the drop, with the lack of a proven goalscorer likely to be their biggest problem.

Pick: Levante to get relegated

Finishing every one of their last three seasons just few points above the bottom three, Sporting Gijon are already used to fighting for their lives. Los Rojiblancos somehow managed to finish last league campaign in top table, albeit just four points above relegated Deportivo La Coruna, but we can safely say that another top half finish is out of the question. With key players Jose Angel and Diego Castro joining Roma and Getafe respectively, Sporting face major problems in creative department, especially as the club failed to bring replacements for the aforementioned players. There is no doubt the team are much weaker than last season and seeing that Sporting narrowly escaped the drop last term, they are definitely expected to enter the relegation struggle, but there are still at least three or four teams weaker than them, meaning they should eventually managed to keep their La Liga status.

Granada caused quite an upset by gaining promotion to Spanish La Liga, but I am certain nobody will be surprised if they manage to survive the first season in top flight. La Grana have completed revamped the squad that played in Segunda last season and even though the team will need some time to gel, Granada look to have more than enough quality to escape the drop. The club have signed some very good players in Guilherme Siqueira, Noe Pamarot, Yohan Mollo, Carlos Martins, Hassan Yebda, Pape Diakhate and Francisco Jara, and now it’s up to coach Fabri Gonzalez to get the best out of a really good side. Granada did lose their opening game to Betis and they could need some more time to hit the ground running, but as soon as that happens, the team will start climbing the La Liga table, so I am positive they will have no problems ensuring survival.

Rayo Vallecano experienced numerous problems within the club last season so it was a real wonder that they managed to gain promotion to the elite division. However, with no solution to the numerous issues on the horizon, the club from the outskirts of Madrid could easily return to Segunda. With three key players from last season, Coke, Armenteros and Aganzo leaving the club, Rayo were forced to bring quite a few new signings, but it is really worrying that most of the arrivals have spent last season on the fringes and will definitely need some time to regain the lost confidence. By the time that happens, Rayo will probably have lost too many precious points to return to the race for survival. Pedro Botelho, Labaka, Raul Tamudo, Dani Pacheco and Raul Bravo all arrived, but as I have already said, they may not be enough.

Pick: Rayo Vallecano to get relegated