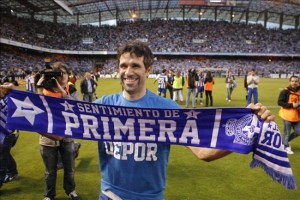 Having reviewed the title contenders and teams fighting for Europa League places in part 1 and mid table sides in part 2 of our La Liga season preview, the time has come to tell you who we believe will get relegated this term. With more than half of the table usually involved in the relegation battle, it will be hard to pick the three teams most likely to go down, but read on to learn about our choices. Also, we’ll be more than happy to hear your opinion on the matter.

Mallorca largely impressed last season to finish the league campaign just few points behind the Europa League places, but I feel we can rule out another top table finish. Key players Ivan Ramis and Gonzalo Castro have left the club, while the players that replaced them are not exactly world beaters, and it appears the Islanders will be involved in the relegation tussle this term. The inexperience of the squad as well as the lack of strength in depth could prove to be a problem, although master tactician Joaquin Caparros can be trusted to keep his side above the water. Good home performances should help los Bermellones pick up enough points to survive another La Liga campaign.

Prediction: Mallorca to stay up

Real Betis proved to be the most exciting side in La Liga last term, with some impressive attacking showings helping the team avoid straight return to Segunda. Los Verdiblancos were unable to keep hold of Roque Santa Cruz and Iriney Santos, but Benat Etxebarria and Alejandro Pozuelo both stayed, while several exciting youngsters plus Damien Perquis arrived at Estadio Benito Villamarin. As a result, coach Pepe Mel has a very balanced squad at his disposal with a decent strength in depth, meaning that Real Betis are more likely to achieve a top table finish than to go down. The reality should be somewhere in between, but do expect los Verdiblancos to produce some magnificent showings along the way. All you betting enthusiasts out there, bear in mind that Betis tend to play over 2.5 goals games.

Prediction: Real Betis to stay up

Real Zaragoza produced a minor miracle to keep their La Liga status last term, having won 9 of last 13 La Liga games, and no wonder they are now hoping to avoid similar scenario. The arrival of Apono, Romaric, Loovens and Wilchez should help the team become more competitive, especially as Lafita was the only notable departure this summer. Talented boss Manolo Jimenez has some very experienced players at his disposal, which is always a great thing when you team are fighting for their lives. The likes of Postiga, Romaric and Paredes should have a key role to play in helping Zaragoza avoid the drop for the second season running. It will be a difficult campaign for los Manos, but the one with a happy ending.

Prediction: Real Zaragoza to stay up

Even if they had been predicted a difficult relegation fight, Osasuna surprised everyone to achieve a seventh-place finish, and they missed out on the Europa League spot by a single point. The squad have since undergone some changes and while they cannot be expected to repeat another such season, los Rojillos should have enough in them to avoid the drop. Even if Osasuna rarely manage to match the top 4 sides, their biggest quality is knowing how to play against fellow strugglers, with points picked up in these matches usually helping them stay above the bottom three. Their Reyno de Navarra Stadium has become a genuine fortress in recent years, which is another reason why Osasuna have every reason to hope for a successful season.

Prediction: Osasuna to stay up

Celta Vigo returned to the top flight after five years in Segunda, but the general impression is the club haven’t done enough to prepare themselves for what awaits them in one of world’s strongest leagues. Having gained promotion with a very talented but inexperienced squad, the Galician side were expected to heavily reinforce the squad in the summer, but that did not happen. Michael Krohn-Dehli and Javi Varas have been the only notable reinforcements in off-season, but that is simply not good enough for a team expected to enter a difficult relegation struggle. Unless Celta management make considerable funds available in January, the Sky Blues will go down at the end of the season. I cannot help but feel the club chiefs haven’t taken their quest for survival very seriously.

Pick: Celta to get relegated

Despite the serious financial problems Valladolid defied the odds to gain promotion to La Liga, but the same problems prevented the club management from properly reinforcing the side in off-season. While key players Sisi and Nfti left the squad, Patrick Ebert, Antonio Rukavina, Omar Ramos and Luis Sastre all arrived at Estadio Municipal Jose Zorilla, but that might not prove enough to avoid straight return to Segunda. With most of the players in the squad lacking La Liga experience, as well as some quality to play at this level, I just cannot see how Valladolid are going to avoid the drop at the end of the season. Miroslav Djukic has proved to be a very talented coach, but he is no miracle worker and will struggle to keep his side in La Liga.

Pick: Valladolid to get relegated

Riding on the excitement wave that surrounded shock promotion to La Liga, Rayo Vallecano recorded some impressive showings in the first part of the league campaign, but they then lost 9 of 10 straight matches only to ensure survival on the last day of the season. With star players Michu, Tamudo and Arribas now gone, the team look destined for the drop, even if they have signed quite a few new players this summer. By the time new signings adapt to the new surroundings, it will have been too late for Rayo to escape the dangerous zone, and if they enter the final stage sitting in the bottom three, I am positive they will get relegated. The lack of a proven goalscorer will prove the biggest issue now that Michu has taken his scoring boots to the English Premier League.

Pick: Rayo Vallecano to get relegated