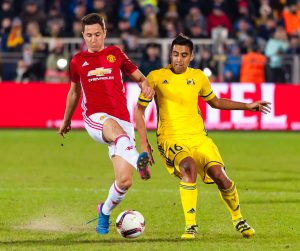 Ole Gunnar Solskjaer’s men fell to their first defeat since the Norwegian took over at Old Trafford to the Ligue 1 champions. Despite a battling first-half, the hosts were completely outclassed following the break as strikes from Presnel Kimpembe and Kylian Mbappe ensured that United now have a huge task at the Parc de Princes in the second-leg.

Herrera, though, insists that the loss will not impact on the team’s confidence as they look to overturn their first-leg deficit. Talking after the game, the Spanish midfielder said: ” Now it is more difficult for us, but we have good examples [of getting good away wins].

“I think this result is not going to hurt us because of the way we lost.

“If you lose being worse than the opponent, that could hurt us. But I think until the corner I couldn’t say we were better [but] the game was under control.”

Following PSG’s victory at Old Trafford, it now looks likely that the Red Devils will suffer another early exit from the UEFA Champions League. Odds of 20/1 are available with William Hill for Manchester United to reach the quarter-finals.