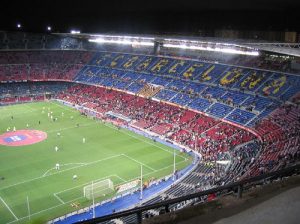 Barcelona will be hoping to overturn a 2-0 deficit to Sevilla on Wednesday night at the Camp Nou as they square off with Sevilla in the Copa del Rey.

Goals from Pablo Sarabia and Wissam Ben Yedder in the first leg at the Ramon Sanchez-Pizjuan Stadium gave Pablo Machin’s men a deserved advantage. They are at 11/1 with William Hill to once again earn victory, whilst they sit at 4/7 to qualify for the semi-finals of the competition.

Elsewhere, whilst Barcelona do have it all to do on the night, they are at a very narrow 2/9 to win the match and at 5/4 with Paddy Power to earn the result that they need and reach the next round of the Copa del Rey, a competition that they have won an eye-watering 30 times in the past.

Barca’s loss to Sevilla in the first-leg was their first loss within their last five games. In those matches, the team managed to keep three clean sheets. Meanwhile, despite having lost three consecutive matches in all competitions in early January, Sevilla have now won two in a row, not conceding a goal. The Blaugrana can be backed to win the game to nil at odds of 29/20 with BetVictor, whilst Sevilla to do the same is available at an extremely generous 25/1.

The hosts currently posses the two highest goalscorers in La Liga – predictably in the form of Lionel Messi and Luis Suarez. The former is at 12/5 to score the opening goal at the Camp Nou, whilst Suarez sits at 11/4 with Betfair. Otherwise, Ben Yedder will be aiming to add to the goal that he scored in the first-leg with another strike against the Catalans. The Frenchman is at 11/1 to net the opening goal and add to his 18 strikes scored in all competitions so far this season.

Regarding injuries, Barcelona still have long-term absentees Samuel Umtiti and Rafinha ruled out. However, there is positive news for Ernesto Valverde with Ousmane Dembele looking likely to return from a troublesome ankle injury. Kevin-Prince Boateng could make his second start for the club after playing just over an hour in the first-leg.

Sevilla also head to the Camp Nou with a few players restricted to the treatment table. Nolito and former Barca forward Munir are both out with long-term problems. Midfielder Maxime Gonalons is also not quite yet ready to return to action. Jesus Navas and Joris Gnagnon are also both doubts ahead of the game.