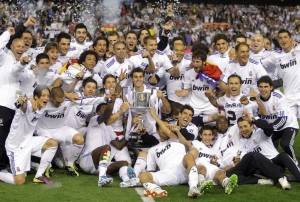 Last season Real Madrid won the La Liga championship with record breaking 100 points, and if you want to know what you can expect from los Blancos as well as their bitter rivals Barcelona this term, then you are in the right place. Besides the El Clasico rivals, part 1 of our La Liga season preview is designed to get you acquainted with top 4 hopefuls and sides fighting for Europa League qualification, with part 2 and part 3 reserved for mid table sides and relegation struggles respectively.

Barcelona may have lost the title chase last term, but they entered the new campaign determined to restore domestic domination. The Catalans not only kept hold of all star players, but also added Alex Song and Jordi Alba to their ranks, making sure the squad are at least a bit stronger than last season. On top of that, Carles Puyol and David Villa have finally recovered from injury, and even with inexperienced Tito Vilanova at the helm, it looks as though Barca cannot fail to lift the league title this term. The squad now have a lot of strength in depth, which will allow the boss to rotate his players during the season, and that is likely to give the Catalans an extra edge over Real Madrid. Barca to win the La Liga title looks a great bet to me.

Real Madrid have done brilliantly to beat Barcelona to the La Liga title last term, but los Blancos could find it hard to successfully defend the coveted trophy. While finally completing the signing of Luka Modric from Tottenham, the Spanish giants easily allowed several squad players to leave Santiago Bernabeu, meaning they are now really short on cover in all areas of the pitch. Their starting line-up is capable of matching Barcelona and dominating against other La Liga sides, but Jose Mourinho could pay the price for allowing Nuri Sahin, Hamit Altintop and Fernando Gago to leave the club. It is not realistic to expect that all key players will remain injury-free throughout the season, and the lack of strength in depth is likely to cost Real a chance to defend the league title. The second-place finish, however, should never come into question.

Having already established themselves as the best of the rest in Spanish La Liga, Valencia now aim for their fourth successive 3rd-place finish, which is pretty much the same as winning the title for any club outside the El Clasico rivals. Los Che have undergone some major changes this summer, with Mauricio Pellegrino brought to replace Unai Emery, and while a number of players have changed, the style of play remained the same. Looking at the arrivals and departures, the team should be similar in quality to that which clinched the 3rd-place finish last term, although this season they will have to withstand a challenge from ever improving Atletico Madrid. That is why I am not really sure that los Che can finish the campaign just behind the El Clasico rivals, but they should have enough in them for a successful top 4 challenge.

Atletico Madrid have established a real reputation for underperforming over the last few years, but everything changed with the arrival of their former player Diego Simeone. The Argentine coach not only led los Colchoneros to the fifth-place finish in La Liga, but also helped them secure the second Europa League title in last three years. Colombian striker Radamel Falcao Garcia didn’t need a lot of time to justify the hefty price tag, while Arda Turan, Adrian Lopez and Juanfran also proved to be excellent signings. The club haven’t been too active in the summer transfer window given that the main objective was to keep the team together, and having succeeded in doing so, los Colchoneros are now hot favourites for the fourth place in the standings. With Raul Garcia back from Osasuna and hotshot Oliver Torres proving his worth at senior level, Atletico look set for another very successful season.

Athletic Bilbao showed a lot of promise last term, having reached Europa League and Copa del Rey finals, but the success came at a cost as the two difficult campaigns prevented them from finishing above the 10th place in La Liga. Los Leones have ensured another European qualification, but, even so, they are likely to pay more attention to their league campaign this term. Even if Fernando Llorente and Javi Martinez leave the club before the end of the transfer window, El Loco Bielsa’s side should have enough quality to achieve a top 6 finish, and if the two players opt to stay, then maybe los Leones can even enter the race for Champions League places. With one of world’s best coaches at the helm and some of Spain’s brightest talent among the ranks, Athletic can be trusted to improve a great deal on the 10th-place finish from last season.

Having undergone major squad overhaul last summer, Sevilla were always going to need some time to gel, and that proved to be the main reason for los Rojiblancos missing out on European qualification. However, with just a couple of more signings this summer, the team look really good at the moment and they look like they can reach their full potential this term. The squad look really well balanced and boast a good strength in depth, so Sevilla can be tipped to achieve a top 6 finish this season. The attacking trio of Negredo, Navas and Reyes is expected to be scoring goals for fin this term, obviously with a little help from Ivan Rakitic and Piotr Trochowski. Gary Medel, on the other hand, will be doing a lot of defensive work and prove why he is considered one of world’s best holding midfielders.

Malaga fans must have been ecstatic when the wealthy investor Abdullah Al Thani bought the club two years ago and they indeed saw their beloved team ensure Champions League qualification with a fourth-place finish last season. However, everything soon started taking the wrong turn as the key players started blaming the club chiefs for owed wages and hinted they could leave the club in the summer transfer window. Four first team regular indeed left, while the club were unable to sign any replacements, which resulted in 16-year-old Fabrice Olinga becoming a first team regular. Boss Manuel Pellegrini still has some world-class players in the squad, but his side desperately lack a strength in depth, which is going to be a massive problem now that the team have qualified for the Champions League.