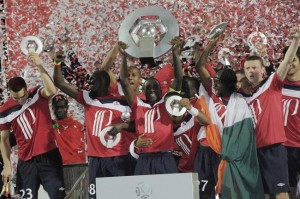 Having given our verdict on the title contenders in French Ligue 1 Season Preview part 1 and mid table sides in French Ligue 1 Season Preview part 2, now it’s time to turn to relegation strugglers. The survival fight in France is as exciting as they get, with often half of the teams fighting for European places and other half battling to avoid the drop. Evian, Dijon and Ajaccio have arrived from Ligue 2 and they will be looking to keep their top flight status at least for another year.

Valenciennes have been involved in the relegation race during every one of the last few seasons, so it is highly unlikely that they will be able to avoid the survival fight this term. Having invested a lot of money into the new stadium and world-class training centre, the club were unable to allocate new boss Daniel Sanchez significant transfer funds, so he is now forced to work with the same squad from last season, minus the captain Milan Bisevac, who joined free-spending Paris Saint-Germain. VAFC were pretty disappointing in pre-season, hinting that they could have big problems this season, although with well established Ligue 1 squad, they should be able to avoid the drop once again. Their defence will suffer without Milan Bisevac, but other parts of the team should be able to compensate. Lower mid table finish looks on the cards.

Pick: Valenciennes to stay up

After spending just one season in Ligue 2, Caen returned to the top flight last season and they did well to avoid a straight return to the second division. Franck Dumas’ side showed a lot of potential last term and they look more than capable of avoiding the drop this season. The club have signed some very good players in Jerry Vandam and Pierre-Alain Frau, although they did stay without star players Youssef El-Arabi and few other squad players. With their squad boasting players with a wealth of top flight experience, Caen could even challenge the top 10 place, especially if 16-year-old striker Mbaye Niang continues to develop in the right manner. This will be a real transition season for Caen as they need to establish themselves as genuine mid table side before setting higher targets in the future.

Pick: Caen to stay up

When Auxerre achieved a 3rd-place finish in Ligue 1 two years ago, little did they know that the feat would almost cost them the place in the elite division. Auxerre did make it to Champions League group stages last term, but the European campaign took the wind out of their sails and they almost got relegated in the end. Thanks to the strong finish of the season, the team finished the league campaign in 9th place, but just five points clear of the bottom three sides. Having failed to keep hold of key players like Pedretti, Jelen, Mignot, Birsa and Quercia, Auxerre look destined for a very difficult season, especially if key midfielder David Ndinga completes a switch to Lyon. With the club management failing to bring proper replacement for the aforementioned players, Auxerre look like one of the main candidates for the drop. The only way how they can survive this season is if all three promoted sides largely disappoint this term, but that don’t look like happening

Pick: Auxerre to get relegated

Nancy have been on the constant downtrend over the last few years and they were very much involved in the relegation struggle in every one of the last three seasons. ASNL managed to avoid the drop thanks to the good finish of the league campaign last term, but they might not be as lucky this term. After seeing that he won’t be able to create a solid Ligue 1 team, talented manager Pablo Correa decided to leave, with controversial Jean Fernandez being appointed in his place. Following the departure of Julien Feret, Landry N’Guemo, Alfred N’Diaye, Gennaro Bracigliano and Marama Vahirua, the squad look much weaker than last term, even if several new players were brought in as replacements for the aforementioned footballers. Nancy look really short on quality in every area of the pitch and they are set for a difficult relegation struggle.

Brest were seen as one of the main candidates for the drop last term, having failed to reinforce the squad that ensured promotion to the elite division, but Alex Dupont’s side defied all odds to finish the season few points above the relegation zone. With the second season syndrome being mentioned by many a football expert, Brest are again in for a difficult task, although, this time, they did sign quite a few new players. However, the arrival of so many players don’t necessarily have to be a good thing as the new players will need a lot of time to gel and time is something Brest do not have. They need to hit the ground running immediately if they want to survive this season, and while Brest remain a tough team to beat, their failure to turn some of the draws into much needed wins can end up costing them Ligue 1 survival. I don’t think Brest will be able to survive this season.

Pick: Brest to get relegated

Even the club chiefs were probably surprised by the fact that Evian gained promotion to the elite division, but as soon as the celebrations were over, the club management started working on building a team capable of surviving their first ever Ligue 1 campaign, and I must say they have done a remarkable job. Veteran playmaker Jerome Leroy arrived from Rennes to add much needed creativity to midfield, while Sidney Govou came from Panathinaikos to help improve the scoring department. Fabrice Ehret, Mohammed Rabiu, Jonathan Mensah, Daniel Wass and Stephan Andersen were also excellent captures, and as a result, Evian now have a team capable of matching most of the sides in French top flight. Evian are expected to achieve the highest position of all promoted sides and they should have no problems staying alive.

Pick: Evian to stay up

Newly promoted Dijon are seen as one of the main candidates for the drop, despite the fact that they have brought quite a few new players this summer. The club couldn’t prevent star striker Sebastian Ribas from leaving the club, so there is no doubt that the team will struggle to find the goals this term. New signings Thil, Varrault, Meite, Matsui, Sankhare and Souprayen all have some Ligue 1 experience, but they are hardly world beaters and most of them look well past their prime. It is for that reason that I don’t see Dijon as a team capable of surviving a very tough competition that is French Ligue 1, especially with so many good sides expected to enter the relegation race. The club management have done their best to help the team avoid the straight return to the second division, but I am not sure that will be enough.

Pick: Dijon to get relegated

As one of the newly promoted sides, Ajaccio are seen by many as the main candidates for the drop, but the Corsican side are looking to defy the odds and avoid the drop this season. Boasting some very talented youngsters in Socrier, Cavalli and Kinkella, coach Olivier Pantaloni was aware that the team needed some experience and he thus overseen the signings of seasoned striker Ilan and midfielder Frederic Sammaritano, while adding few more talented youngsters in Leyti N’Diaye and Paul Lasne. However, without a doubt the biggest coup of the Corsican club was the capture of highly rated Mexican keeper Guillermo Ochoa, especially as the 26-year-old was targeted by some of the biggest European clubs. Adding such a good keeper to defence that only conceded six home goals last season could prove to be a key to Ligue 1 survival.

Pick: Ajaccio to stay up