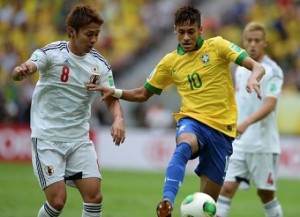 Fresh from the comfortable victory over Japan, Brazil take on Mexico hoping to secure their place in the Confederations Cup semi-finals.

Having lost to Italy in their opening game, el Tri find themselves in all sorts of problems, and they have no choice but to try and defeat the hosts on Wednesday evening.

Luiz Felipe Scolari was heavily criticized at the start of his second reign as the national team boss, with his side winning just one of six international friendlies.

However, as time went by, things slowly started falling into place, with the Seleccao reaching top form just before the start of the tournament finals.

Very good displays in matches against England and France showed the team were well prepared for the Confederations Cup, and 3-0 opening win over Japan acted as a huge confidence boost.

As a result, Brazil go into the Mexico game as 1.40 (2/5) favourites with Paddy Power, and with a huge weight off their shoulders.

Having broken his scoring duck with a magnificent goal against Japan, Neymar is 2.00 (1/1) with Coral to score in his second successive match.

Luiz Felipe Scolari has no fresh injury worries, but Fred is expected to continue as a lone striker despite his back-up Jo scoring the third goal against the Blue Samurai.

Unlike their next opponents, Mexico did not really create a good introduction into the Confederations Cup, having recorded two goalless draws in the 2014 World Cup qualifiers.

El Tri were heavily criticized after putting their World Cup qualification in danger, and they weren’t really allowed to properly prepare for the tournament finals.

The players’ lack of confidence was there for everyone to see in the opening match against Italy, and it was a defensive mistake that decided the winner in the end.

While their back line wasn’t as impressive as in the World Cup qualifiers, Mexico proved to be a real danger on the counterattack, and that can be reason for optimism ahead of the Brazil match.

El Tri may not be able to defeat hosts Brazil in the crucial encounter, but they look a good bet to score at odds of 1.73 (8/11) at Sportingbet.

In spite of the under-par showing against Italy, boss Juan Manuel de la Torre is likely to stick to the side that started the opening match.