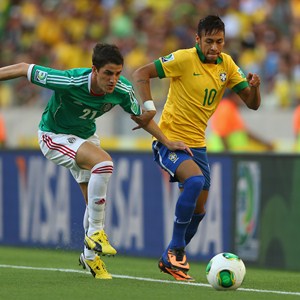 Following the lucky win over Japan, Italy are aware they need to show massive improvement if they are to see off hosts Brazil and avoid Spain in the semis.

Meanwhile, the Seleccao only need one point to remain in first place having defeated Japan and Mexico without conceding a single goal in the process.

Italy may have impressed at the Euro 2012, where they were beaten in the final by Spain, but they have since largely struggled for form.

Cesare Prandelli’s side did climb to the first place in their World Cup qualifying group, but their performances in competitive matches, as well as friendly games, left a lot to be desired.

This is why not many people saw them as genuine contenders at the Confederations Cup, but the Azzurri produced a convincing display to record a 2-1 triumph over Mexico in their opening match.

They were then completely outclassed by Japan on Thursday, but somehow managed to record a victory that saw them qualify for the semi-finals.

Italy, however, now need to beat Brazil if they want to avoid another clash with red-hot Spain, and they are no less than 6.00 (5/1) with BetVictor to win in Bahia.

They will be without Daniele De Rossi, who misses out through suspension, but there are no other selection issues at the moment.

Shortly after the star-studded Under-23 side lost the 2012 Olympics final to Mexico, the national team chiefs decided to sack boss Mano Menezes and replaced him with Luiz Felipe Scolari.

The experienced manager needed some time to make this team his own, but everything fell into place just before the start of the Confederations Cup.

As a result, Brazil impressed at the start of the tournament to record victories over Japan and Mexico, but they cannot afford to relax just yet.

Seeing as how the Seleccao will give their best to keep the good atmosphere in the squad with yet another win, it is hardly surprising they are 1.70 (7/10) favourites with Coral.

Meanwhile, after scoring two beautiful goals in the first two matches, star forward Neymar is 2.40 (7/5) with Ladbrokes to continue the run.

With Paulinho picking up a hamstring injury, Hernanes is likely to start in midfield, while in-form Jo could be preferred to Fred up front.

Get Your £88 in Free Bets!
Bet In-Play on today's matches with Bet365 and get £200 for FREE
We Highly Recommend These Places
Share your Opinion!