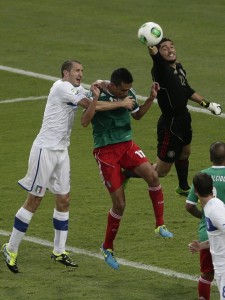 The hard-fought victory over Mexico took Italy on the verge of qualifying for the semi-finals, but the Azzurri need to finish the job and see off the Blue Samurai as well.

Japan were powerless to prevent a 3-0 defeat to Brazil in their opening match and they are certainly hoping to fare much better in second group game.

Italy have been far from impressive leading to the Confederations Cup, having largely struggled in both international friendlies and World Cup qualifiers.

With June draws against Czech Republic and weak Haiti acting as further blows to the players’ confidence, not too many people saw the Azzurri as one of the main candidates for the title.

However, seeing as how Italy usually impress when everybody write them off, Cesare Prandelli’s side stayed true to their reputation and kicked off the competition with a 2-1 victory over Mexico.

While Andrea Pirlo scored from a free-kick in his 100th appearance for the national team, it was Mario Balotelli who scored the winner and proved recent thigh injury was in the past.

Italy now take on Japan in an attempt to clinch the semi-final berth and the Azzurri are 1.70 (7/10) with bet365 to make it two victories in a row.

Given that Daniele De Rossi and Mario Balotelli both came through the Mexico game unscathed, while Leonardo Bonucci should return to the side.

Just ten days ahead of the start of the Confederations Cup, Japan became the first team to qualify for the 2014 World Cup as they shared spoils with Australia at home.

The Blue Samurai further improved the atmosphere in the squad with an away triumph over Iraq, but they, nonetheless, failed to prove their worth in the opening match against Brazil.

Alberto Zaccheroni’s men not only conceded three goals to their more illustrious opponents, but were surprisingly completely ineffective up front despite being allowed a lot of space.

After team’s key players failed to step up the plate against the Seleccao, the Italian coach will be looking to see some improvement against the Azzurri, but it remains to be seen if his side can match the Euro 2012 finalists at the moment.

Japan are no less than 6.00 (5/1) with Betfred to return to winning ways, but I don’t know many people who will be backing the Blue Samurai here.

Zaccheroni could make some changes to the starting line-up, although the lack of strength in depth is likely to be a problem.