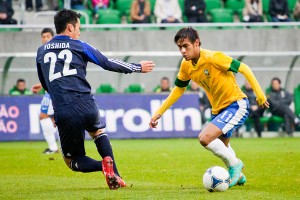 The 2013 Confederations Cup kicks off with a match between hosts Brazil and Japan, the first team to have secured their place at the 2014 World Cup through qualifiers.

Luiz Felipe Scolari’s side are aware than anything less than a trophy would be considered a failure, and they can see this tournament as a dress rehearsal for next year’s World Cup.

The Seleccao have been far from impressive since the former Chelsea boss took over from Mano Menezes, but they seem to have managed to return to the right track.

Impressive display in the 2-2 draw with England and a resounding 3-0 triumph over France acted as much needed confidence boosts, but Brazil desperately need to continue the rich vein of form.

With Mexico and Italy also in their group, this is seen as a must-win game for the hosts, who are 1.30 (3/10) favourites with Stan James to win their opening game.

New Barcelona forward Neymar is set to start despite failing to score in his last nine outings for club and country, and he can be backed at 2.00 (1/1) at Coral to break his scoring duck.

Atletico Mineiro striker Jo has kept his place in the squad as Leandro Damiao failed to recover from a thigh injury, but there are no fresh injury worries for Luiz Felipe Scolari.

Following the unlucky exit in the last 16 stage at the 2010 World Cup, the national team chiefs appointed Alberto Zaccheroni as the new boss and that proved to be an excellent decision.

The Italian led Japan to the 2011 Asian Cup trophy, while his side impressed in the 2014 World Cup qualifiers to become the first national team to secure their place in Brazil.

While losing 4-0 to Brazil in October 2012, the Blue Samurai have done pretty well in other international friendlies, beating the likes of Korea and France in the process.

Japan arrive at the Confederations Cup on the back of a 1-0 qualifying win in Iraq, and they are certainly hoping to produce an upset in their opening game against Brazil.

The Blue Samurai clearly face an uphill task at the tournament, but there may be some value in odds of 7.00 (6/1) offered at Sportingbet on Japan to qualify for the semi-finals.

CSKA Moscow midfielder Keisuke Honda should play despite struggling with fitness, while Yuto Nagatomo has fully recovered from injury.