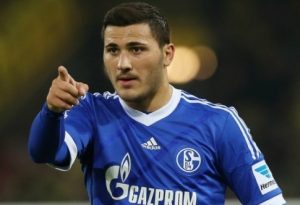 Serie A champions Juventus have reportedly agreed a deal for the Bosnian left-back Sead Kolasinac.

Schalke defender is running out of his contract with the Bundesliga outfit and will be arriving to Juventus as a free agent when his deal expires next summer.

Sky Sport Italia have reported that a deal between Juventus and Kolasinac is already in place after Beppe Marotta had personally made an agreement with the 23-year-old player.

Bosnia and Herzegovina international left-back is regarded as a long-term successor for French veteran Patrice Evra, who on his own part has been linked with a sensational return to his former club Manchester United.

Sead Kolasinac has been a mainstay at Schalke first-team since 2012 having already made 79 appearances for Die Knappen. The Bosnian also added three goals for his club.

Dynamic left-back was previously linked with Premier League clubs Manchester City and Liverpool, who ended up missing on the talented defender.

Five-time successive Serie A champions Juventus have become renowned for their shrewd transfer dealings over the last couple of years which saw the Italian side grab talented players on free and selling them for a significant profit later on, while at the same time preserving the quality core which helps them win trophies and record notable results internationally.

Juventus are coming off from a compelling 3-0 win over Bologna which keeps them four points adrift of Roma at the top of Serie A standings and with a game in hand nonetheless.

The Old Lady shift their attention to Coppa Italia with a midweek home game against Atalanta.