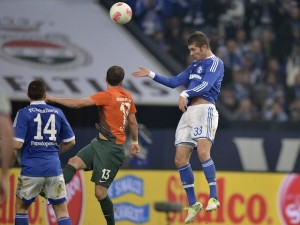 Fresh from the Champions League defeat to Chelsea, Schalke will attempt to boost their top 4 hopes by defeating Werder Bremen at Veltins Arena.

That will be no easy task given that Robin Dutt’s men have just ended a four-match winless run and are determined to stay close to the European positions.

This season didn’t have the best of starts for Schalke as the Miners were largely struggling in the opening exchanges, but the marque signing of Kevin-Prince Boateng made all the difference.

Buoyed by the arrival of such a high-quality player, Jens Keller’s side got off their Champions League campaign to a perfect start, while also improving their league position.

And while the team did lose three of last four matches, conceding a total of nine goals in the process, that seems to be the result of a very difficult fixture list rather than anything else.

The Miners were twice beaten by Chelsea in the Champions League, whereas they also lost the league clash against arch rivals Borussia Dortmund, but somewhat made amends for the poor run by beating high-flying Hertha away.

Schalke now have a good chance to revive their top 4 bid, and they are 1.67 (2/3) with BetVictor to defeat Werder Bremen on Saturday.

Following some very difficult years under long-serving boss Thomas Schaaf, Werder have been showing a lot of improvement since former Bayer Leverkusen coach Robin Dutt took over the reigns.

The Weserstadion outfit kicked off the Bundesliga campaign with two straight victories, but a three-match losing run that ensured threatened to stop them in their tracks.

Werder have since improved to pick up nine points from next six fixtures, climbing to eighth in the overall standings.

And with European positions now well within reach, Robin Dutt’s men will attempt to spring a surprise against Schalke, with away win paying no less than 5.75 (19/4).

However, forward Franco Di Santo has resumed training after recovering from a muscle problem and he looks set to start up front.