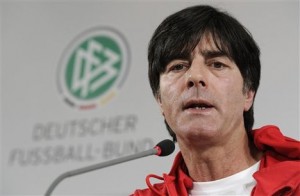 Germany boss Joachim Low has announced a 27-man provisional squad for the European Championship in Poland and Ukraine.

The highly rated tactician selected 23 outfield players and 4 goalkeepers and revealed that he would probably wait until 29th May before trimming down his squad to 23 names.

Schalke youngster Julian Draxler is the only real surprise in the squad, whereas high-profile players Simon Rolfes, Dennis Aogo, Cristian Trasch and Stefan Kiessling have been left out.

“We have to make the best of this situation and try to form a team capable of winning the tournament in a relatively short time span,” Low said.

“I don’t see us as clear favourites. Spain have been the most consistent team over the last few years. There are also quite a few other teams capable of winning the competition. A European Championship is always a devilishly hard tournament to win.”

The Germany boss is not too worried by the fact that this will be the first major tournament for a number of players.

“We have many young players, who have never played a big tournament. It’s a similar situation to 2010.

“An advantage is that our foundation is better than in 2008 or even 2010, with our philosophy now solidified over the past two years. We have a very balanced squad with a good age structure.”

Online bookmakers see Germany as second favourites for the coveted trophy, right behind reigning champions Spain and die Mannschaft are 4.50 (7/2) with Paddy Power to go all the way.