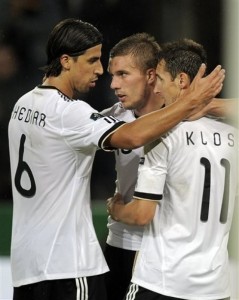 Germany and Brazil are set to square off at Mercedes-Benz Arena in what should be an enthralling encounter.

Germany continue to impress under Joachim Low, having already qualified for the 2012 Euro after winning all seven qualifying games and they are now 2.40 (7/5) with William Hill to beat Brazil as well.

Michael Ballack has yet again been overlooked, but Bundesliga hotshot Mario Goetze is expected to star in the playmaker role.

Brazil continue their preparations for the 2014 World Cup with another game against strong opponents, and there are no doubts that Selecao will have something to prove in Stuttgart.

The team are a bit low on confidence following the disappointing exit from the Copa America, even if Mano Menezes’ side have shown a lot of potential at the tournament.

Brazil really raised their game following the slow start and they were extremely unlucky to lose to Paraguay, having completely outclassed their opponents.

The game against Germany will be a perfect opportunity for Selecao to prove their worth, so bear in mind that Brazil are 3.10 (21/10) with Bet365 to win the game.

Mano Menzes has named a similar squad to that which played at Copa America, although David Luiz and Lucas Leiva have withdrawn from the squad.