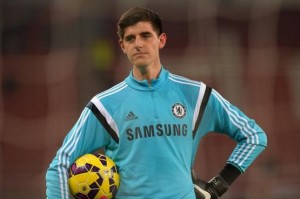 Asked whether he will remain at Chelsea next season, Thibaut Courtois provided an answer that has sent shivers down Blues fans’ spines.

Belgium goalkeeper refused to express commitment to his club by saying he didn’t know if he would be staying in London the following season.

“I don’t know. It depends on the wishes of my club.”, Courtois told the press ahead of Belgium’s game with Portugal on Tuesday.

Thibaut Courtois and the entire Chelsea’s team have endured a horrid season with their form plummeting the fans’ preseason aspirations of fighting to retain the Premier League trophy and challenging the Europe’s crown.

Contrary to everyone’s wishes, Blues are now deep down in the Premier League mid-table struggle struck with the realisation that they will not even be in the UEFA Champions League next season.

Chelsea return to action with a visit to Aston Villa on Saturday and are given the odds of 1.57 (4/7) @SportingBet to claim the maximum three points and try to close the gap behind top four Premier League clubs that is now a ten-point cushion.

The 23-year-old Belgium international has endured a turbulent season of his own as he had been out of action for four months with a knee injury, which has arguably left him a different player upon his return.

Courtois has been a commanding presence in Chelsea’s box last season, but ever since his return from injury there has been less authority, perhaps more hesitation in his performances that could be attributed to a long spell on the sidelines, but also with a feeling of disappointment and disillusion that could have forced Belgium international hesitate to commit to Chelsea future.

Thibaut Courtois signed a five-year deal in September 2014, but his latest remarks will have alarmed Real Madrid and Florentino Perez, who is believed to be a huge admirer of Chelsea’s shot stopper.

With David de Gea out of Real Madrid’s agenda following a failed transfer last summer, Los Blancos could be enticed to go for the Blues keeper towards the end of the season.