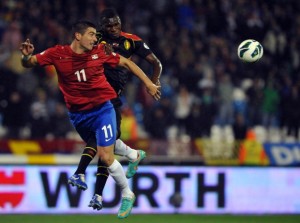 Group A leaders Belgium play host to Serbia in an attempt to edge closer to the place at the World Cup finals, with their opponents hoping to revive their bid by winning in Brussels.

Boasting one of the most talented sides in national team’s history, the Red Devils have finally started playing to their potential and they are closing in on their place in Brazil.

Buoyed by the 4-2 friendly victory over arch rivals Netherlands, Belgium enjoyed a bright start to the 2014 World Cup qualifiers, beating Wales away before completely outclassing Croatia in a 1-1 draw.

It was the game in Serbia that acted as a huge confidence boost, with Marc Wilmots’s men sustaining the opening pressure from the hosts to score three goals on the break.

The team have since recorded three straight qualifying wins without conceding, so no wonder they are now 1.62 (5/8) favourites with William Hill to see off Serbia as well.

Boss Marc Wilmost has some selection problems ahead of the Serbia clash, with Thomas Vermaelen likely to miss out and Thibaut Courtois injury doubt.

Nevertheless, with so much strength in depth, Belgium should have no problems compensating for the absentees on Friday evening.

Serbia had high hopes before the start of the 2014 World Cup qualifier following the arrival of boss Sinisa Mihajlovic, but the former Fiorentina coach has quickly made a mess out of the national team.

Star players Nemanja Matic and Adem Ljajic continue to be overlooked, with the team now looking increasingly average and not ready to battle some of Europe’s top sides.

The fact Serbia are already nine points behind Belgium and Croatia basically speaks for itself, and it is not realistic to expect they can show a considerable improvement in the final four fixtures.

The promising display in the 2-0 victory over Scotland did improve the atmosphere in the team, but there is a reason why the Eagles are 6.75 (23/4) with 888sport to win in Belgium.

Selection worries continue to mount for Mihajlovic, with Matija Nastasic suspended and Zoran Tosic, Filip Djuricic and Milos Ninkovic all missing through injury.

FK Partizan striker Aleksandar Mitrovic is in line to be handed his international debut, while Premier League stars Branislav Ivanovic and Aleksandar Kolarov should start as well.