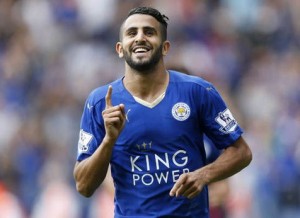 Leicester City boss Claude Puel has suggested that Riyad Mahrez deserves a positive reception as he returns to the King Power Stadium.

The Algerian winger could make his first appearance against his former club as the Foxes face off against Manchester City in the Carabao Cup on Tuesday evening. Despite having forced through his £60m move to the Etihad Stadium, and even refusing to train for ten days during the last January transfer window, Puel has stated that Leicester fans should be grateful for what Mahrez achieved with the club.

In 179 appearances for the Foxes, the 27-year-old scored 48 goals and provided 38 assists, lifting the Premier League title and winning the PFA Player of the Year award at the conclusion of the 2015/16 campaign.

Talking ahead of the clash, Puel said: “Riyad gave his best for the club and the club and his team-mates gave a lot for him too.

“I hope he can come back and remain on the bench and can keep a good feeling with all the people.

“He was an important part of the success with the title and we cannot forget all he gave for the club. I hope he can have a good welcome.”

Since signing for the reigning Premier League champions, Mahrez has made 24 appearances, scoring seven goals and providing six assists in all competitions. He can be backed at 6/1 with Paddy Power to open the scoring against his former employers.