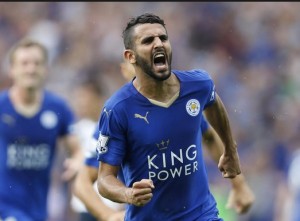 The 25-year-old Algeria attacking midfielder has been one of the biggest surprises in the Premier League this season with his impressive performances for Leicester City, which have in great deal helped Foxes rise to the summit of the table.

Mahrez has scored 14 Premier League goals thus far, while he also provided 10 assist for his teammates.

He signed a new deal at the start of the season that is to keep him at Leicester City until 2019, but Claudio Ranieri is aware it will be very hard to keep hold of his most prised possession in the summer, with former Le Havre man already being watched by the likes of Manchester United, Barcelona and Real Madrid.

ESPN FC reports that Arsenal are also ready to step into the race for the red-hot winger, with Arsene Wenger exploring the option to sing Mahrez during the summer transfer window.

Riyad Mahrez has been rumoured with a January move away from the King Power Stadium, but the player himself ruled out the possibility to leave Leicester City as he is dedicated to his team’s cause.

Mahrez did, however, claim it would be an honour to play alongside a player like Leo Messi, thus opening doors for a possible summer move away from Leicester.

Leicester City manager Claudio Ranieri was quoted last week saying he would sanction a move away from the club if Mahrez were to file a transfer request at the end of the season.

Algerian sensation has taken the Premier League by storm forming a deadly partnership with the league’s top scorer Jamie Vardy this campaign.

The Leicester City’s attacking duo have shared 33 goals between them so far and will have the chance to add some more on Tuesday when Foxes meet West Bromwich Albion at their King Power Stadium. Ranieri’s men are looking at 4/6 (1.67) @Bet365 to emerge victorious from their Tuesday’s clash as Foxes aim to extend their positive home run to ten wins on a bounce.

Riyad Mahrez joined Leicester City for around £400,000 from Le Havre in 2014 and his rise to prominence has been nothing short of impressive.