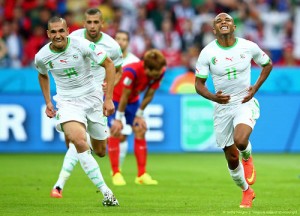 The impressive victory over Korea Republic means Algeria have destiny in their own hands seeing as how they only need one point to qualify, unless the Taeguk Warriors defeat Belgium by two goals or more.

Russia, on the other hand, can still qualify by beating Les Fennecs, which is enough to suggest we will see a great game of football at Estadio Joaquim Americo Guimaraes.

Before the tournament start, Algeria were not exactly tipped as one of the teams to progress from Group H, but Vahid Halilhodzic’s charges have quickly proved the doubters wrong.

Les Fennecs played some good football and took the lead in their opening match against favourites Belgium, but they could do little to avoid a 2-1 defeat having conceded two late goals.

The boss then opted to make wholesale changes to his starting line-up for the Korea game, which worked like a charm as Algeria went on to record a 4-2 triumph.

As a result they are now on the verge of making it to the knockout stages, with Les Fennecs currently 1.83 (5/6) to qualify.

Even with his side looking quite impressive against Korea, boss Vahid Halilhodzic is expected to make a couple of changes to the team.

The likes of Riyad Mahrez and Mehdi Lacen are expected to come in for Abdelmoumene Djabou and Carl Medjani.

Russia are making their third appearance at the World Cup finals since the Soviet Union fell apart, and they have yet to get past the group stage.

Having been placed in one of the easiest groups at the tournament finals, Sbornaya Komanda were tipped to make it through alongside Belgium, but Fabio Capello’s side have been utterly disappointing so far.

Two defence-minded performances did not actually produced the desired results, as they shared spoils with Korea Republic before losing to Belgium.

Even so, Russia still have a decent chance to qualify for he Last 16 stage, but they obviously need to show a massive improvement if that is to happen.

A win over Algeria should prove enough, but there is very little value in backing Fabio Capello’s charges at 2.15 (23/20).

The boss could succumb under public pressure and include Aleksandr Kerzhakov and Alan Dzagoev into the starting line-up, while Yuri Zhirkov could be recalled.