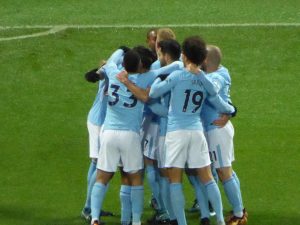 Manchester City have a deficit to overturn against Tottenham Hotspur in the UEFA Champions League as they continue their pursuit of an historic quadruple.

Pep Guardiola’s men fell to a narrow 1-0 loss at the Tottenham Hotspur Stadium last time out courtesy of a Heung-Min Son strike. They now have a great opportunity on home soil to reach the semi-finals of the UEFA Champions League.

In their history, the reigning Premier League champions have only ever reached the semi-finals of the Champions League once and that was during the 2015/16 season. Pep Guardiola’s men have odds of 4/7 with Coral to do just that. Meanwhile, Tottenham have not reached a European semi-final of any sort since their appearance in the UEFA Cup last four during the 1983-84 season. They have a price of 13/10 to make their advantage count and progress to the next round.

However, one aspect that the North Londoners will have to be wary of is Manchester City’s form at the Etihad Stadium. They have been flawless on home soil, winning 12 consecutive matches in all competitions since the turn of the year. In that time they have also scored 49 goals at a rate of 4.08 per game and only conceded three at a rate of 0.25. City to win and once again score over 3.5 goals is available at a price of 17/10 with Paddy Power. That statistic might look even more worrying for Spurs considering that Mauricio Pochettino’s men have lost six out of their last seven games away from home.

Although, Tottenham are in relatively good form having won their last three games and not conceded a single goal. They have not managed to keep four consecutive shut-outs since September 2013 and can be backed to win to nil at a huge price of 20/1 with Betfred.

Spurs though are missing a few key personnel for the trip to the Etihad. Harry Kane was injured in the last game between the two teams and is unlikely to return before the end of the season. Serge Aurier and Eric Dier are also both restricted to the treatment table. Dele Alli is also a doubt with a hand injury but could return in time to play a part in the game. Harry Winks is going to be missing until at least the weekend with a troublesome groin problem. In better news however, Fernando Llorente and Erik Lamela could both play a part.

Elsewhere, Guardiola could have a considerable boost with Brazilian midfielder Fernandinho set to potentially return from a muscular injury. However, Oleksandr Zinchenko is a major doubt with a hamstring problem. Goalkeeper Claudio Bravo is still restricted to the sidelines.

Considering the various problems of both teams, the most likely candidate to open the scoring according to the bookies is Sergio Aguero who is available at odds of 14/5. Son is apparently one of the favourites to score first from a Tottenham perspective and is available to be backed at 11/1.