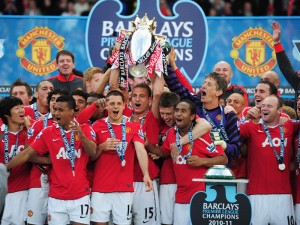 The new edition of the most exciting sports competition is set to commence, with the title race likely to go down the wire. Manchester United are defending the title, but they face stiff competition from Chelsea, Arsenal, Liverpool and Manchester City. All these sides will be featured in our English Premier League Season Preview part 1, whereas part 2 and part 3 of our season preview will offer you expert insight on mid table sides and relegation strugglers respectively. French Ligue 1 Season Preview and German Bundesliga Season Preview are also available.

Manchester United face a tough task of defending the title, but there are no doubts they remain the team to beat. Sir Alex Ferguson has found excellent replacements for Edwin van der Sar and Paul Scholes in David de Gea and Tom Cleverley, while Phil Jones and Ashley Young should prove to be a big asset to the squad. United still boast the best defence in the league and excellent midfield area with lots of options, while attacking partnership of Wayne Rooney and Chicharito Hernandez will make sure the goals just keep coming. On top of all their qualities, the Red Devils also have by far the best manager in England, with Sir Alex Ferguson proving time and again that he can mastermind victories over big European sides even with seemingly weaker squad. The Community Shield game, in which Ferguson largely tinkered with his starting line-up, proved that United can outplay even the strongest teams in England regardless of the team Sir Alex sends on the pitch. The big strength in depth will be one of key components to what is likely to be a successful title challenge.

Chelsea have been awfully quiet in the summer transfer window following the arrival of Andre Villas-Boas, but you shouldn’t be surprised if the Blues wrap up a couple of big name signings in the final days of August. The squad are in major need of some fresh blood, so the additions of Oriel Romeu from Barcelona and Romelu Lukaku from Anderlecht will be more than welcome, while few more players should follow. The return of Daniel Sturridge from Bolton could prove to be just the spark this team need, while fit again Frank Lampard will also be looking to make a difference. I am still not convinced with Fernando Torres and Villas-Boas seems to think the same way, so we could easily see Didier Drogba spearhead the attack in the 4-3-3 formation, which could be a good thing. Summing up, Chelsea do look capable of mounting a serious title challenge, but I am afraid they will again be playing second fiddle to United.

Liverpool had had a disastrous start of the season under small-club manager Roy Hodgson, but the club owners soon made a decision that could very well prove to be the best in club’s recent future – bringing King Kenny back to the fold. The Kop hero didn’t waste his time and managed to help the players restore the lost confidence, which later prove to be the key to their uptrend in fortunes. After finishing the season on a high and some very good dealings in the transfer window, the confidence is again high at Anfield and the fans believe this could be Liverpool’s season. Following some disappointing displays in pre-season, the Reds have beaten Valencia in their last friendly game, hinting that they are well prepared for the start of the Premiership campaign. With Downing, Adam and Henderson all arriving this summer, and Jose Enrique likely to follow, Liverpool will have big strength in depth for the first time after quite a while and I believe they have what it takes for the top 4 finish, especially if Steven Gerard manages to shake off his injury problems.

Following sixth successive trophy-less season, the pressure is on Arsene Wenger and his players to deliver, although the Frenchman probably still doesn’t know how his starting line-up will look like this term. Cesc Fabregas and Samir Nasri are on the verge of leaving the club, while Juan Mata, a defender and few more players are likely to arrive before the transfer window is over. The departure of Gael Clichy shouldn’t be a problem as Wenger has excellent replacements in the view of Gibbs and Traore, while Gervinho is already proving to be a great signing. With Rosicky, Wilshire, Ramsey, Song and Diaby in midfield, the Gunners will have enough quality in the centre of the part even if Fabregas and Nasri leave, and they will continue to dominate most of the games. The inexperience and lack of physical strength will again prevent them from making a serious title challenge, but I can still them finishing the season in top 4, especially if Wenger manages to sign another defender.

Manchester City did well to finish last season in 3rd place, but I just cannot see them repeating such a result this season. Roberto Mancini has already proven to be incapable of controlling the massive egos in the City dressing rooms and as long as he’s got players like Mario Balotelli in the squad, there will be no team spirit at Eastlands. There are no doubts that Kun Aguero and Gael Clichy will improve the quality of the squad, but the Community Shield game has shown that the Citizens are nowhere near the required quality to match their more illustrious neighbours, even when Fergie mix things up. The Champions League campaign will also prove to be a major distraction for the Citizens, but the lack of cohesion and team spirit is their biggest shortcoming in my opinion. I predict them a much tougher season than last term.

Tottenham did wonders in their first ever Champions League campaign last term, having reached the quarter-finals of the competition, but the tough European campaign prevented Spurs from challenging for the top 4 place in the Premiership. There will be no similar distractions this term as Harry Redknapp has vowed to use second string line-ups in this year’s Europa League, but the team could still face problems in their top 4 quest, with City, Arsenal and Liverpool all battling for the same prize. Keeping hold of Luka Modric could be key to Tottenham’s chances this season, but the lack of true goalscorer will again prove to be a major problem. I really don’t understand why Redknapp hasn’t already splashed a cash on such a player as everybody can see that Crouch, Defoe and Pavlyuchenko are hardly the most prolific strikers in the Premiership. Despite the incredible amount of talent Redknapp has at his disposal, I believe that Spurs will again miss out on the top 4 finish.

Pick: Tottenham to finish above Everton, Aston Villa and Fulham