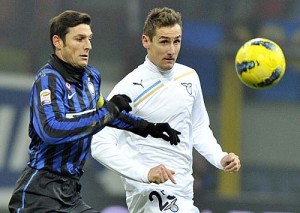 Lazio go into this game one point clear of Inter, but two points behind top 3 rivals Udinese, meaning they can miss out on the Champions league qualification even if they win at Olimpico.

The Neroazzurri have done brilliantly to return into contention for a top 3 finish, but they, too, could miss out on the big prize even if they win this game.

Lazio spent much of the league campaign just behind Milan and Juventus, but the Biancocelesti never looked good enough to clinch the final Champions League berth.

That probably had something to do with numerous injuries and suspensions Edy Reja had to deal with from day one of the season, but even Europa League qualification can be considered a success for the Biancocelesti.

Lazio ended the five-match winless run with an unlikely away victory over Atalanta, but having failed to beat Lecce and Siena in their last two home games, they don’t have much to hope for before the clash with Inter.

Massimo Moratti’s decision to appoint inexperienced Andrea Stramaccioni as the new boss was clearly a major gamble, but the reality is Inter are now playing much better than they did under Gasperini and Ranieri.

The Neroazzurri have lost just one of their last eight games, while winning five and they thus climbed to sixth place in the standings.

A victory over Lazio would see them climb to fourth or even third if Udinese lose at Catania and Napoli fail to beat Siena.

The visitors will be brimming with confidence following the 4-2 triumph over bitter rivals Milan and they are 2.50 (3/2) with Paddy Power to win this game as well.