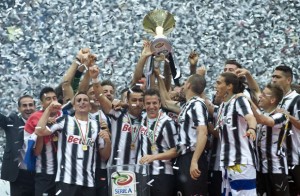 Having beaten AC Milan to the Scudetto last term, Juventus are now the number one candidates for the league title, but Milan, Inter and Roma are also in the mix. As far as the race for European berths is concerned, we should see quite a lot of fire there, and it could easily happen that just few points make a difference between a Champions League place and missing out on Europe.

Read on to find out more about the top Italian sides, or check out part 2 and part 3 of our season preview to get acquainted with mid table teams and relegation strugglers.

While the successful title challenge last term was a bit of a surprise even for their own fans, it is fair to say nobody would be surprised if Juventus defend the Serie A title this season. with Giovinco, Isla, Asamoah, Lucio and Bendtner, the team are clearly stronger than last season, even if they have failed to sign a world-class centre forward as promised. Seba Giovinco and Nicklas Bendtner should make the Bianconeri more lethal up front, and with such a great strength in depth, the Old Lady should have no problems defending the league title. Everything seems to be going into Juventus’ favour of late, given that most of their title rivals are much weaker than last term. With Pirlo, Vidal and Marchisio in midfield and three Italy starters at the back, the Bianconeri will continue challenging for honours this season.

AC Milan virtually said goodbye to the serious title challenge when they decided to cash in on Zlatan Ibrahimovic and Thiago Silva, especially as they failed to sign proper replacements. With Alessandro Nesta also gone, the Rossoneri are expected to have major problems at the back, given that Acerbi and Zapata should struggle to create a solid centre-back partnership. After Montolivo and De Jong joined Boateng and Nocerino in the centre of the park, the midfield area look extremely strong, but the Rossoneri also seem to lack some quality up front, with Giampaolo Pazzini the only centre forward in the squad. All in all, Max Allegri’s side cannot be expected to mount a serious title challenge, but they appear to have enough in them to secure the final Champions League berth.

Pick: Milan to finish in top 3

Inter have undergone a major squad overhaul after the 6th-place finish in Serie A last season, and I quite like what they have done during the summer transfer window. Palacio, Handanovic, Cassano and Pereira are excellent signings and they should add a new quality to the side. With so many new players, the team will clearly need some time to gel and that, together with the lack of strength in depth, could end up costing the Neroazzurri dearly come end of the season. Inter are expected to mount a serious top 3 challenge, but I am not sure they will be successful. If they happen to miss out on the final Champions League berth, the Europa League qualification should not come into question.

Pick: Inter to finish in top 4

Luis Enrique’s inexperience and a shaky back line were the main reasons for the disappointing season and the club chiefs have done really well to address the burning issues. Zdenek Zeman was brought from Pescara to take over the reigns, while quality players Piris, Balzaretti and Castan arrived to reinforce what was a very weak defence. On the other hand, Mattia Destro and Michael Bradley were signed to improve team’s scoring department and following some very good showings in pre-season, Roma look ready to mount a serious top 3 challenge. With Francesco Totti and Pablo Osvaldo back to their best, the Giallorossi are expected to significantly improve on their 6th-place finish, although the small squad could end up costing them dearly in the latter stage of the league campaign.

Pick: Roma to finish in top 4

Rather than splashing out the cash to replace Ezequiel Lavezzi and Walter Gargano, Napoli opted to sign Valon Behrami plus several talented youngsters, while immensely talented Lorenzo Insigne returned from Pescara to try and replace la Bestia. The talented forward will be vying with ever improving Goran Pandev for a place alongside Edinson Cavani in attack, while Marek Hamsik will revert to a more defensive role. The absence of big changes in the summer should give Napoli an early advantage over their top 3 rivals, who have all signed quite a few new players, so expect the Azzurri to hit the ground running early on into the season. However, I am not sure Walter Mazzarri’s side will have enough in them for the final push and they might again have to settle for a top 5 finish.

Pick: Edinson Cavani to be Serie A top goalscorer

Lazio are another side that should profit from making very little changes in the off-season, but with the competition for European places fierce, the Biancocelesti look like they will miss out on European qualification this term. New boss Vladimir Petkovic simply don’t have enough quality players for Serie A and Europa League campaigns, although they are expected to sustain the challenge from heavily reinforced Fiorentina and end the league campaign in 6th place. As it has been the case over the last few years, Lazio again have a compact side with a great team spirit, but they don’t have enough players with such individual quality that they can change the course of a game in an instant. Considering that lack of transfer activity at Olimpico, I don’t think anybody at the club would be too disappointed with a sixth-place finish.

Pick: Lazio to finish in top 6