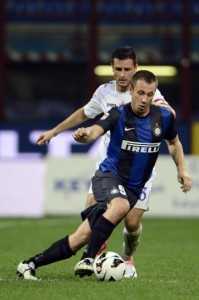 Stakes will be high when Fiorentina take on Inter at Artemio Franchi as both sides are slowly drifting away from European places following a bright start to the season.

This is especially true for Viola, who have been utterly disappointing after the winter break, picking up just 4 points from 6 league games.

With Vincenzo Montella’s side also eliminated from Coppa Italia in the New Year, there is a big risk of this season turning into a major disappointment.

After returning to winning ways against Parma, Viola could do little to avoid defeat to arch rivals Juventus, which left them four points behind their next opponents.

Seeing that Fiorentina can seriously boost their top 5 chances with a win over Inter, you should know home win pays 2.05 (21/20) at Ladbrokes.

The hosts will be heavily relying on star forward Stevan Jovetic to produce much needed goals, with the Montengro international 2.40 (7/5) at Sportingbet to score his 10th goal of the campaign.

Vincenzo Montella will have important midfielder Alberto Aquilani back from suspension, but Fernandez, Hegazy, Camporese and Rossi remain in the infirmary.

Inter Milan remain in the running for three major trophies, although winning one of those and achieving a top 3 finish in Serie A would certainly be considered a success for the club.

The Neroazzurri edged closer to the Europa League last 16 stage by beating Cluj 2-0 in midweek, but the win came at a cost as star striker Diego Milito picked up a knee injury that will see him miss the rest of the season.

While the Argentine is bound to be sorely missed, everybody at the club was certainly delighted to see his compatriot Rodrigo Palacio continue score a brace against Cluj, with the former Boca star now 3.50 (5/2) with SkyBet to score against Inter as well.

Following a four-match winless run, the Neroazzurri have improved to win their last two fixtures, and they are 4.10 (31/10) with Paddy Power to make it three in a row.

Key midfielder Fredy Guarin returns from suspension, but Cristian Chivu is doubtful through a muscle injury.

If Real Madrid win The Champions League 2013, BetVictor will refund all losing outright winner bets. Up to up to a maximum of £/€50 per person/household.

Get Your Bet Refund!
We Highly Recommend These Places
Share your Opinion!