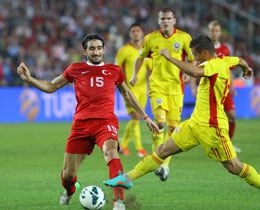 The 3-0 victory over Hungary saw Romania emerge as favourites for the second place in the group, and a triumph over Turkey would all but secure them a place in the play-offs.

Fatih Terim’s side, on the other hand, are aware they need to win this game if they are to have any chance of reaching the tournament finals and they are expected to act accordingly.

Having reached just one major tournament since 2000, Romanian national team have clearly been on a downtrend of late.

Numerous managerial changes didn’t make their task any easier, but it appears Tricolorii have finally found some stability under Vitor Piturca.

Even if many continue to doubt his selection choices, the 57-year-old has helped Romania cement the second place in the standings in one of the toughest qualifying groups, and that has got to be respected.

Away draw at Hungary and two defeats to Netherlands marred the impressive start to the qualifying campaign, but Friday’s 3-0 triumph over Hungary saw Romania return to the right track.

Seeing that it is their next opponents who are under pressure at the moment, there may be some value in betting on home win, at 2.20 (6/5) at Sportingbet.

Alexandru Chipciu misses out through injury, whereas Alexandru Bourceanu is suspended. Ciprian Marica, who is currently without a club, is set to keep his place in the side.

Legendary coach Fatih Terim has again been given the task of salvaging country’s World Cup hopes, as he was appointed on temporary basis, probably only until the end of the qualifying campaign.

The Galatasaray boss masterminded a 5-0 victory over Andorra at the beginning of his third spell in the national team, but he is all too aware that the match against Romania will be a whole different ball game.

Turkey may sit just three points behind their next opponents with just three games to go, but while Romania play Andorra and Estonia in the final two group games, Ay Yildizlilar face Estonia and Netherlands.

This basically means that they will be effectively out of the running for the second place in the group with anything but a win in Romania, but odds of 3.50 (5/2) offered at BetVictor are enough to suggest the visitors face a tough task in Bucharest.

Emre Belezoglu continues to miss out through injury, but Fatih Terim has no new selection worries ahead of Romania game.