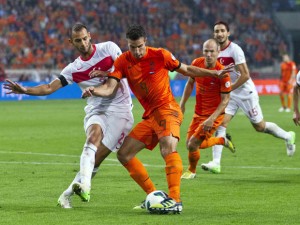 Three straight victories saw Turkey return to the second place in the standings, but chances are they will need another one of those to clinch a play-off berth.

Netherlands have long ago secured automatic qualification and they arrive at Sukru Saracoglu on the back of an 8-1 triumph over Hungary.

Despite boasting a very good squad, Turkey have been struggling in the past few qualifying campaigns and they were on the verge of elimination following the home draw against Hungary in March.

Fatih Terim’s side had previously lost three of first four qualifiers and it looked as though they would certainly miss out on the tournament finals.

Nevertheless, while hammering Andorra at home, Turkey impressed to beat rivals Romania on the road, while also defeating Estonia on Friday.

As a result, Ay Yildizlilar are masters of their own destiny and they will make it to the play-offs if they can beat Netherlands.

That might be easier said than done, but with the visitors completely out of motivation, you should know home win pays 2.50 (3/2) at Betfred.

Fenerbahce midfielder Caner Erkin, who has been playing as left-back in the national team, misses out through suspension, but there are no other worries for Fatih Terim.

Even if they tend to disappoint at tournament finals, Netherlands always impress during qualifying campaigns and rarely drop more than few points.

Despite being placed into a pretty strong qualifying group this time out, Oranje continued the trend by winning eight of nine 2014 World Cup qualifiers, surprisingly only sharing spoils with Estonia.

Netherlands thus ensured their place in Brazil with few games to spare, but that did not stop them from hammering Hungary 8-1 on Friday.

However, with Louis van Gaal revealing that he was set to make changes to his starting line-up, odds of 2.90 (19/10) for away win at bet365 do not look too tempting.

Robin van Persie is unlikely to be risked after he has been playing through the pain of late, whereas Nigel de Jong misses out through suspension.

Roma star Kevin Strootman is doubtful with an ankle problem, whilst Dirk Kuyt, Wesley Sneijder and Leroy Fer are pushing for starting places.