Republic of Ireland vs Sweden preview 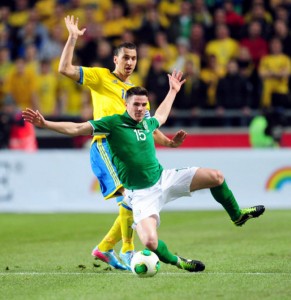 The World Cup dream remains pretty much alive for both sides as they prepare to square off at Aviva Stadium in Dublin, hoping to make that extra step towards Brazil.

With both Ireland and Sweden sitting on 11 points, together with Austria, chances are we will see a cracking encounter on Friday evening.

Following several unsuccessful attempts, Ireland finally qualified for a major competition as they took part at the Euro 2012, but they could do little to avoid all three group defeats.

The team have, however, recovered well from the heartbreak and they are still very much in contention for a place at the 2014 World Cup finals.

After holding Sweden to a goalless draw on the road, Giovanni Trapattoni’s side had an excellent chance to edge even closer to the second place in the standings as they had a one-goal lead against Austria, but the goal they conceded in injury time denied them two previous points.

With four games to go and trips to Austria and Germany next, Ireland need to try and beat Sweden in Dublin, and they are 2.80 (9/5) with BetVictor to do that.

Greg Cunningham has been called to replace Stephen Kelly, but Marc Wilson and Darren Randolph should be fit to play.

Sweden, too, were pretty disappointing at the Euro 2012, but showed plenty of improvement in the 2014 World Cup qualifiers.

Their amazing comeback against Germany, when they earned a 4-4 draw after coming back from four goals down, will remain forever written in the history books, but the team have also suffered several slip-ups along the way.

While they could only muster a goalless draw at home against Republic of Ireland, the Scandinavians were beaten by Austria and they are now hoping to make amends in Dublin.

That is going to be no easy task considering their opponents are also very motivated, but bear in mind away win pays 2.70 (17/10) at BetVictor.

Key defender Andreas Granqvist misses out through suspension, whereas Rasmus Elm and Mickael Lustig are out injured.

The likes of Kim Kallstrom, Ola Toivonen and Alex Kacaniklic have been recalled and they could play some part.

Get Your £88 in Free Bets!
Great Asian Handicap odds for this week's matches with 188Bet. £25 FREE
We Highly Recommend These Places
Share your Opinion!