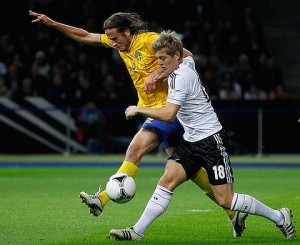 Austria go into the crucial World Cup qualifier hoping to cement the second place in the standings, while Sweden could make a giant step towards Brazil by winning in Wien.

While they were awarded a place at the Euro 2008, Austria haven’t qualified for a major tournament since 1998, and this is the first time in a while they have an outside chance of playing at the biggest stage.

The team sit in second place, tied on points with Sweden and Ireland, but they need to start beating the top sides in the group if they are to realize their dream.

After hammering Kazakhstan and Faroe Islands, Marcel Koller’s side were somewhat fortunate to bring one point from Ireland, having scored an equalizer deep into injury time.

Austria, nonetheless, have a good chance to edge closer to World Cup berth and they are 2.60 (8/5) at Ladbrokes to defeat Sweden in Wien.

The hosts don’t have too many selection issues at the moment, as only Veli Kavlak is suspended, but the fact their key players are seeing little playing time at club level could prove to be a problem.

Marko Arnautovic has received a call-up in spite of his club suspension and he is even tipped for a starting berth.

With the exception of Zlatan Ibrahimovic, Sweden never really had any big stars in the squad, but they, nonetheless, managed to establish themselves as a top European side over the years.

Solid showings at the Euro 2012 did nothing to hurt their reputation even if the Nordic side ended up missing out on the place in the quarter-finals.

With boss Erik Hamren staying at the helm, Sweden enjoyed a bright start to the 2014 World Cup qualifiers, with their amazing 4-4 draw in Germany something that will not be quickly forgotten.

Home draw with Ireland was probably team’s only under-par result of late, but a victory in Austria would certainly get them closer to winning the second place in the group.

Online bookmakers don’t seem to see Sweden as the favourites here, but there is a good value in odds of 3.40 (12/5) offered at BetVictor on away win.

Boss Erik Hamren has no fresh injury worries, although Tobias Hysen has withdrawn from the squad due to personal reasons.