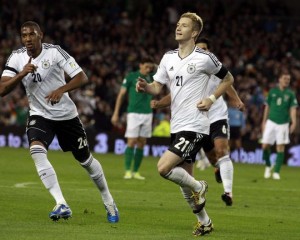 High-flying Germany will be aiming to record their fourth victory on the bounce when they take on Sweden, a team that are also in good spirits having won their first two 2014 World Cup qualifiers.

While die Mannschaft were far from disappointing at the Euro 2012, they did need some time to recover from the under-par result, given they had been touted as one of the main candidates for the trophy.

Friendly defeat to Argentina did nothing to improve the atmosphere in the squad, but once again, Joachim Low’s side managed to find their form when it was needed the most.

Die Mannschaft were below par in the 3-0 victory over San Marino, but away triumphs over Austria and Republic of Ireland saw them climb to the top of group standings and helped the players restore the lost confidence.

After scoring six goals past Trapattoni’s defence-minded Ireland, it is no wonder the Germans are just 1.30 (3/10) with William Hill to see off Sweden.

Joachim Low welcomes back Philipp Lahm, who missed the match in Dublin through suspension, but Sami Khedira is likely to miss out having picked up an injury in the same game.

Sweden, too, disappointed the fans with their showing at the Euro 2012, even if they defeated France in their final group game.

The squad have since suffered just minor changes, with Olof Mellberg retiring and players like Alex Kacaniklic, Tobias Sana and Mathias Ranegie getting their chance to impress.

Sweden did well to beat Kazakhstan in their opening 2014 World Cup qualifier, but were made to work hard for the win at Faroe Islands, having come from a goal behind to record a 2-1 victory.

The Nordic country now face a tough task against in-form Germany, but with Zlatan Ibrahimovic in the squad, they look a good bet to score in Berlin at odds of 1.70 (7/10) offered by Sportingbet.

Johan Elmander has resumed full training after recovering from injury, meaning boss Erik Hamren will have fully fit squad to choose from.