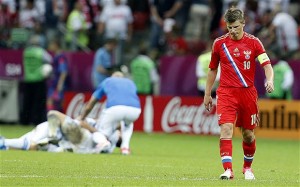 The Russia Football Union have drawn up a list of potential candidates for the national team coaching job, with some high-profile managers in the mix.

The RFU statement read: “The Russian Football Union has officially informed that the organisation plans to consult, in full compliance with the rules of FIFA and UEFA, the appointment of the head coach of Russian national team, with the following experts:

Former England boss Fabio Capello is seen as hot favourite to replace Dick Advocaat and he is currently 3/2 with Stan James, while former CSKA Moscow boss Valery Gazzaev is priced at 4/1.

Rafa Benitez is 7/1 to be appointed next Russia manager, whereas Marcelo Lippi and Marcelo Bielsa are both 10/1.

Stan James doesn’t seem to believe that Pep Guardiola and Harry Redknapp are interested in the Russia job, seeing they are 14/1 and 16/1 respectively.

Following the disappointing exit from the Euro 2012, Russia will soon start preparations for the 2014 World Cup qualifiers, having been placed into the same group as Portugal, Israel, Azerbaijan, Northern Ireland and Luxembourg.