FA Cup third round draw round up 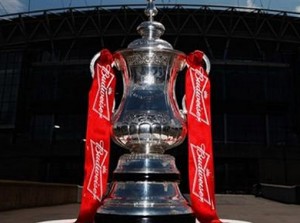 FA Cup holders Arsenal will host Hull City, the side they beat in the final at Wembley in the third round of this season’s competition after the pair were the first two teams picked out in yesterday’s draw on Humberside.

The sides were also paired up in the rehearsal, and the Tigers will be keen to avenge the defeat the suffered in May having surrendered a two-goal lead to eventually lost 3-2 to Arsene Wenger’s side after extra time.

The Gunners are widely available at 10.0 (9/1) to retain the trophy for what would be the second time this season, with the Tigers 101.0 (100/1) shots to go on better and lift the trophy this time around.

In three other all Premier League ties, Burnley will face Tottenham Hotspur at Turf Moor in a repeat of the 1962 final, Leicester City host Newcastle United and Everton and West Ham United face off on Merseyside.

Liverpool travel to AFC Wimbledon evoking memories of the 1988 final when the Crazy Gang pulled off one of the biggest shocks in the competitions history by beating the Reds 1-0 while Leeds United travel to Sunderland having met at Wembley in the last game of the 1972/73 season.

Seven time winners Liverpool at 11.0 (10/1) with Bet 365 to lift the trophy in May, while the top three in the market are Premier League leaders Chelsea, champions Manchester City and Manchester United.

Favourites Chelsea at priced at 6.5 (11/2) with a variety of bookmakers after being drawn at home to Watford, with City 7.0 (6/1) ahead of their home tie with Sheffield Wednesday while 8.0 (7/1) shots Manchester United with travel to the winners of the second round replay between Accrington and Yeovil Town.

Championship leaders Derby County also face a side from the top tier of the non-league in Southport while Blyth Spartans – the lowest ranked side remaining in the competition, are rewarded with a home tie against Birmingham City.

The ties will be played between the 3rd and 6th of January, with the final scheduled for Saturday, May 30th.