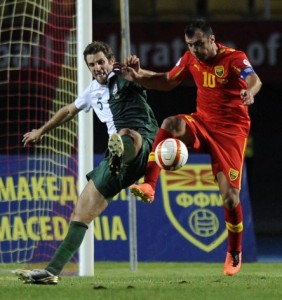 Wales boss Chris Coleman will be without a number of first team regulars in Tuesday’s World Cup qualifier against Serbia.

Midfielder Jonathan Williams and defender Sam Rickets both picked up injuries in the 2-1 defeat to FYR Macedonia on Friday and they remain doubtful for the Serbia clash.

Meanwhile, captain Ashley Williams is suspended and Gareth Bale is unlikely to start due to the lack of match fitness.

“Sam Ricketts is limping heavily and Jonny got a boot on his foot and he’s on crutches, so that’s not great,” Coleman said. “The way they’ve come off the pitch, it’s going to be tough for us.

“Ash had a yellow card, which will leave him out. We’re already without Joe Allen plus Gareth is obviously not going to be able to start.”

The good news is Hal Robson-Kanu returns from suspension, while their opponents also have worries of their own.

Key midfielder Nemanja Matic is suspended, whereas Miralem Sulejmani and Neven Subotic have withdrawn, and Radosav Petrovic is doubtful.

Having shown some improvement of late, Wales can be backed at 3.00 (2/1) offered at BetVictor to record what would be the third victory of the qualifying campaign.

Get Your £88 in Free Bets!
Bet In-Play on today's matches with Bet365 and get £200 for FREE
We Highly Recommend These Places
Share your Opinion!