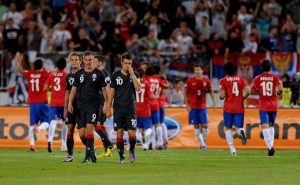 This could be the perfect opportunity for Wales to get revenge on Serbia for two heavy defeats in the 2014 World Cup qualifying, and at the same time climb to the top of Group D standings.

The Eagles, on the other hand, are eager to extend the impressive run of results and they head to Cardiff in excellent spirits.

The Wales national team are enjoying the most successful period in history, and they hope the Euro 2016 semi-final appearance will be the sign of things to come.

Playing with a great deal of confidence, the Dragons have become a tough nut to crack even for Europe’s top sides and it is clear they are not the same team that were beaten 6-1 by Serbia in Novi Sad four years ago.

Players like Bale, Ramsey, Allen, Gunter and Williams are still in the squad, but Wales have since shown tremendous progress as a team, as witnessed by their latest results.

After hammering Moldova 4-0 and sharing spoils with Austria, the Dragons suffered a slip-up against Georgia, and they now need to try and defeat group leaders Serbia.

Wales have been made 2.50 (3/2) favourites to see off their next opponents, but it is clear that they will not have an easy job on Saturday evening.

Chris Coleman faces a serious defensive crisis at the moment considering that Ben Davies, James Collins and Jazz Richards are all out injured, with Joe Walsh and Adam Matthews drafted into the squad.

Serbia have become widely regarded as perennial underachievers over the years, and their prima donnas could learn a lot from Wales stars when it comes to giving their best for their country.

Following several disappointing campaigns, the Eagles have shown some improvement under Slavoljub Muslin, but we believe they were somewhat fortunate to take seven points from their first three games.

Most goals were scored thanks to individual quality of Southampton playmaker Dusan Tadic and if Wales find a way to stop him, they will stand an excellent chance of claiming maximum points.

Serbia continue to make too many defensive mistakes even now that they have switched to three at the back, and they will face all sorts of problems against the likes of Bale and Vokes.

Nemanja Pejcinovic and Ivan Obradovic have been called to the squad, while Nemanja Matic returns to the side from suspension.