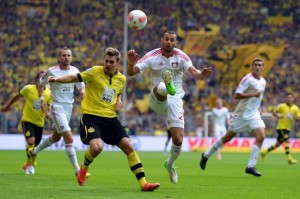 Struggling Bayer Leverkusen will attempt to improve their league position by defeating Borussia Dortmund, but that is clearly easier said than done.

The Millionaires continued the rich vein of form with a 2-2 draw against Real Madrid and they head to Bay Arena in excellent spirits.

Bayer Leverkusen appear to have problems with the busy schedule at the start of the season, as they cannot seem to find any sort of consistency.

Die Werkself currently occupy tenth position in the Bundesliga standings with mere 7 points from 5 fixtures, but there is still plenty of time to catch their top 4 rivals.

Meanwhile, Leverkusen have taken part in two highly exciting Champions League fixtures, both of which ended in a stalemate.

After squandering a two-goal lead against CSKA Moscow, die Werkself were denied a victory at Stade Louis II as Kamil Glik scored in the dying moments of the match, and they will have to find a way to better guard their lead.

Lars Bender and Omer Toprak face fitness test, with Wendell and Aleksandar Dragovic ready to step in if needed.

Meanwhile, Karim Bellarabi, Joel Pohjanpalo and Vladlen Yurchenko are definitely out, while Julian Brandt could be preferred to Admir Mehmedi.

Borussia Dortmund are rightly regarded one of Europe’s best clubs and they continue to prove their worth season after season.

Even with several star players leaving and other important footballers sidelined through injury, the Millionaires have enjoyed an excellent start to the new campaign.

BVB have climbed to second in German Bundesliga, determined to place extra pressure on holders Bayern Munich, while also impressing in the Champions League.

Following the 6-0 away triumph over Legia Warsaw, the Millionaires completely outclassed star-studded Real Madrid at Signal-Iduna Park, but eventually had to settle for a 2-2 draw.

Andre Schurrle is unlikely to start as he battles a knee problem, but Matthias Ginter and Christian Pulisic have shaken off minor knocks and Marc Bartra is out injured.