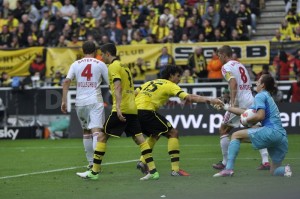 Revived Bayer Leverkusen will be looking to pile more misery on out-of-form Borussia Dortmund when the two sides meet at Bay Arena on Saturday.

Die Werkself had a poor start to the season, taking one point from first three games, but they have since showed serious improvement.

Bayer Leverkusen went on to record 6 wins, 4 draws and 1 defeat in next 11 fixtures, climbing to sixth in the overall standings.

Having closed the gap behind Champions League positions to four points, die Werkself will attempt to extend the good home run and leapfrog Borussia Dortmund as well.

Bayer Leverkusen won four of six home games in Bundesliga this term, while sharing spoils in the other two, with their attacking record quite impressive.

Namely, Heiko Herrlich’s men scored two or more goals in each of those six fixtures, and they are now 1.80 (4/5) to extend the run against BVB.

The head coach is expected to revert to four at the back, with Lars Bender likely to continue in the heart of defence alongside Jonathan Tah.

Unlike their next opponents, Borussia Dortmund started the season strongly, but then began to struggle, and they are now in an unenviable position.

Head coach Peter Bosz is under a great deal of pressure after his side failed to win any of their last six competitive matches, with the players completely low on confidence.

The Millionaires seemed to have recovered well from back to back defeats to Stuttgart and Tottenham, as they were 4-0 up in the derby against Schalke at half-time, but even that didn’t prove enough.

Namely, Borussia Dortmund had to settle for a 4-4 draw after the Miners scored 4 second-half goals, the last of those deep into injury time.

The Millionaires will now attempt to end the barren run against Bayer Leverkusen, but that will be no easy task given the opposition’s record at their Bay Arena.

Peter Bosz is expected to ring changes to his starting line-up, with Maximilian Philipp and Andre Schurrle tipped to start.

Mario Gotze, Pierre-Emerick Aubameyang, Erik Durm, Marco Reus and Sebastian Rode are some of the notable players missing through injury.