Southampton ready to break the bank for Alex Oxlade-Chamberlain 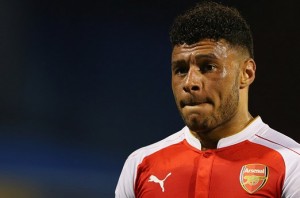 Arsenal midfielder Alex Oxlade-Chamberlain is the No. 1 transfer target for Southampton, who are ready to dig deep into their pockets in order to bring the 22-year-old England international back to St Mary’s.

As a youth product of Southampton, Alex Oxlade-Chamberlain spent a single year with the Saints’ first team before he was snapped by Gunners in 2011 for a reported fee of £15 million.

Arsenal winger is currently happy at the Emirates stadium, despite the fact he has seen his playing time significantly decrease in the ongoing season with the Gunners.

However, Arsenal are believed to be ready to listen to offers for the host of homegrown players including Kieran Gibbs, Karl Jenkinson, Aaron Ramsey, The Walcott and aforementioned Alex Oxlade-Chamberlain as Arsene Wenger is reportedly looking to replace the British core during summer with a fresh crop of domestic talent.

Southampton are closely monitoring the situation regarding their former winger and are ready to pounce during summer and lure Oxlade-Chamberlain with a lucrative offer that is to make him the highest-paid Southampton player, according to Express.

What is more, Saints are ready to offer him the vice-captaincy in order to sweeten the deal for Arsenal man.

Transfer move towards Alex-Oxlade Chamberlain would be seen as another confirmation of Southampton’s ambition and determination to keep Ronald Koeman at the club past this summer.

Alex Oxlade-Chamberlain has two years on his current contract with the London-based club, but he is believed to be ready for a change of scenery in order to get more playing time and regular first-team football.

The 22-year-old England international has played 22 Premier League matches thus far and has bagged one goal in the process.

Southampton are currently sitting seventh in the Premier League table, seven points behind Manchester City in fifth with five more games to play. Saints travel to Goodison on Saturday and are standing at 3.00 (2/2) @Ladbrokes to claim the maximum three points from their trip to Everton.