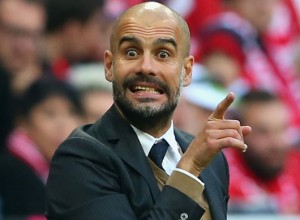 Soon-to-be Manchester City manager Pep Guardiola has already rolled up his sleeves and started preparing the ground for his new job.

Spanish tactician has been confirmed as the new Manchester City boss and will be replacing Manuel Pellegrini at the end of the season, but Guardiola made a promise to focus solely on Bayern Munich during his final months in charge of the Bavarian giants.

Still, having met his future employers in Amsterdam on Monday, Pep Guardiola is apparently already working hard to prepare himself for the new chapter.

Guardiola was pictured meeting Manchester City’s director Txiki Begiristain in a luxury hotel in Amterdam and two of them have spent two hours discussing possible transfers, according to reports.

Begiristain and Guardiola are close friends who already worked together in Barcelona and they have already started compiling a list of the potential summer signings.

According to German newspaper Bild, Pep Guardiola and Begiristain are working on a deal for Ilkay Gundogan, who turned down a contract renewal with Borussia Dortmund and is likely to leave Bundesliga at the end of the current campaign.

Guardiola is believed to have already met with Gundogan’s agent to discuss a potential move for the German midfielder.

In addition, The Times claims that the Spaniard is also keen to make Arsenal’s Alex Oxlade-Chamberlain another addition to his Manchester City squad. Guardiola is said to be holding Alex in high regard since 2014 and Bayern’s 1-1 draw with Arsenal.

Oxlade-Chamberlain has endured an inconsistent season with Arsenal with injuries only making things worse for the English winger, who is contracted to Arsenal until 2018.

Pep Guardiola is looking to bolster his defence line as well and is believed to have set his sights on John Stones from Everton as well. PSV Eindhoven defender Jetro Willems is also believed to be on Guardiola’s wishlist, along with Ajax Amsterdam’s Riechedly Bazoer.

Following his two-hour meeting with Begiristain, Pep Guardiola returned to Munich to continue preparations for the weekend’s Bundesliga match with Werder Bremen.