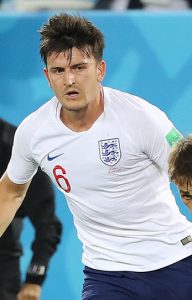 Leicester City defender Harry Maguire has committed his future to the club by signing a new five-year contract.

The England man will now remain at the King Power Stadium until at least 2023 and becomes the latest in a long line of players in the East Midlands to secure their future. Jamie Vardy, Wilfred Ndidi and Kasper Schmeichel have all signed new deals in the past few months.

Signed from Hull City last summer, Maguire has enjoyed a meteoric rise in the East Midlands. Following a campaign in which he played every minute as Leicester finished ninth in the Premier League, he scooped the club’s player of the year award.

He also did enough to earn a spot in Gareth Southgate’s England squad for the 2018 World Cup. There he put in even more exemplary performances and also scored the opener as the Three Lions beat Sweden 2-0 to reach the semi-finals.

The 25-year-old was reportedly coveted by Jose Mourinho’s Manchester United during the summer but he suggested that he owed his loyalty to Leicester.

Upon penning his new deal, Maguire said: “They [Leicester] gave me an opportunity to play in the Premier League and built a great platform for me to go and perform at the World Cup, so I thank them a lot. I owe them a lot and I’m looking forward to the future.”

The defender has begun this season as he ended the last and even managed to score a last minute winner against Southampton in recent weeks.

Maguire is priced at 20/1 to open the scoring with William Hill as England take on Switzerland ironically at the King Power Stadium on Tuesday evening.