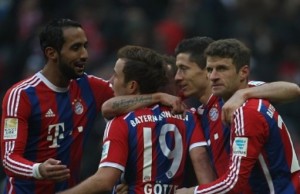 Arsenal are believed to be keen on landing three Bayern Munich first team members during the summer transfer window.

Following yet another disappointing campaign for Gunners, Arsene Wenger is likely to add some more firepower in order to make his team competitive enough for the next season of the Premier League.

Arsenal have had a positive start to the season and even lead the way in front champions Leicester City at one points of the campaign, but have suffered a dip in form in the closing stages of the season and are now occupying the third place in the standings, three points clear of Manchester City in fourth.

Gunners are closing the season next weekend with a home game against relegated Aston Villa and are given the odds of 1.62 (8/13) @BetVictor to claim a HT/FT win and keep their Champions League safe and sound.

Arsene Wenger has been faced with a huge pressure this year, but despite the heat he is likely to remain at Arsenal next year to continue with his project.

And according to different reports, Arsenal are keen on even three Bayern Munich stars, who could depart from Allianz Arena at the end of the season.

First in line is Robert Lewandowski.

The Polish striker has hinted he would like to continue his career in England and, according to Mirror, Arsenal are believed to be interested in offering him a chance to make a move to Emirates. Gunners are looking for a world-class striker and Lewandowski is thought to be the main target. Bayern are likely to ask for up to £50 million for the prolific striker, who still has three years in his contract with the Bavarian giants.

Another Bayern Munich player on the radar is Moroccan defender Mehdi Benatia.

The former AS Roma centre back has lost his place in the pecking order and with Bayern set to pounce for Borussia Dortmund captain Mats Hummels, the 29-year-old Benatia is likely to make a move out at the end of the season.

Arsenal are interested, but the player himself has stated he would prefer a return to his former club AS Roma.

Mario Gotze is another Bayern Munich star linked with Arsenal.

Former Borussia Dortmund midfielder is another player linked with a move away from Bayern and his ex-club, but Liverpool as well have expressed interest in acquiring his services, but Arsenal are believed to be monitoring the situation ready to pounce for the player who has been connected to Arsene Wenger in the past.

Arsenal manager will have a transfer budget in excess of £150 million and is ready to dig deep in order to bring sound names to Emirates during summer.