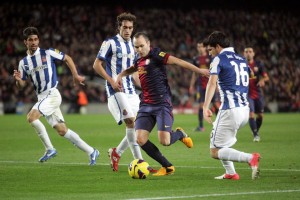 Espanyol are in the driving seat after the surprising 1-0 victory over second-string Barcelona team in the first leg, but if any team can overturn a one-goal deficit without problems it is the Catalans.

Ernesto Valverde’s side have been going really strong this term, impressing in all the competitions entered and the slip up at RCDE Stadium is unlikely to prove too costly.

Having already created an 11-point cushion at the La Liga summit, Barcelona will be able to fully focus on their Champions League campaign, although Copa del Rey has the priority at the moment.

Even though Valverde was ultimately punished for fielding an under-strength side, things would have been different had Leo Messi scored from the penalty spot after the hour mark.

Barcelona have since returned to the right track, hammering Real Betis 5-0 on the road, and are now priced at 4/5 to defeat Espanyol by three goals or more.

Having won by three-goal margin or greater in last five home games vs los Periquitos, we wouldn’t be surprised to see the trend continue.

Espanyol fans haven’t had a lot of cause for celebration in recent years, so they must have been delighted to see their beloved team beat mighty Barcelona a week ago.

Los Periquitos showed a real fighting spirit in the first leg to not only prevent their more illustrious opponents from scoring, but also win the game thanks to a late goal.

Espanyol were unable to build on said result as they were then beaten at home by revived Sevilla, thus ending a very good run of results.

Los Periquitos now head to Camp Nou hoping to avoid yet another embarrassing defeat, but that is definitely easier said than done.

Having conceded 23 goals on last five visits to the iconic stadium, they will have to show a massive improvement at the back if they want to reach the Copa del Rey semis.

Diego Lopez looks set to continue in goal, whereas Pablo Piatti and Jose Jurado could both play a part after recovering from injury.