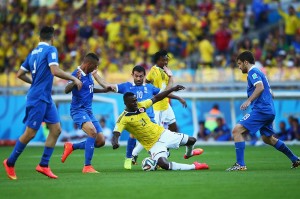 After losing their first round matches, this will be a must-win game for both Japan and Greece, with one of the two sides likely to start packing their bags after the match in Natal.

The Blue Samurai arrived in Brazil in confident mood, having won five straight international friendlies, but boss Alberto Zaccheroni admitted he was worried by the amount of goals his side were conceding.

With the confidence high, Japan started their opening fixture against Ivory Coast brightly, taking the lead through Keisuke Honda, but they seemed to tire in the second period.

The Blue Samurai allowed their opposition to score two second-half goals and win the match, with Alberto Zaccheroni’s side on the back foot for much of the second period.

With key players Kagawa, Okazaki and Nagatomo struggling to make an impact and captain Hasebe clearly out of form following a lengthy spell on the sidelines, Japan face a tough task against Greece in their second group game.

The Asian side have been made 2.20 (6/5) favourites, but I don’t feel there is any value in those odds as the Blue Samurai seem to be far from the desired form at the moment.

Even with his important players failing to perform against Ivory Coast, chances are the likes of Hasebe and Kagawa will keep their places in the side.

Despite showing a lot of potential at recent European Championship tournaments, Greece have yet to shine at the World Cup finals.

Having failed to progress from the group stage in 1994 and 2010, Ethniki hope to make things right in Brazil, although their campaign did not get off to a good start.

Even with Greece looking good during the opening stages and enjoying a lion’s share of possession, they eventually had to settle for a 3-0 defeat to Colombia that makes their task of qualifying for the next stage very difficult.

Nevertheless, with Japan unlikely to cause them too many problems at the back and Ethniki showing decent attacking potential, odds of 3.75 (11/4) offered on away win do look tempting.

While Panagiotis Kone is likely to keep his place in the side after impressing against Colombia, Ioannis Fetfatzidis could come in to the starting line-up following a good cameo role.