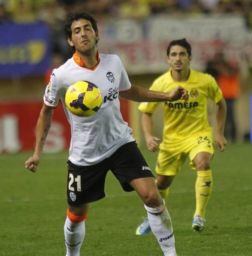 Just six hours before the year 2015 comes to an end, local rivals Villarreal and Valencia will decide who wins the final La Liga match of the year.

High-flying Yellow Submarine have a perfect chance to eliminate los Che from the race for the Champions League positions, so no doubts the pressure is on Gary Neville’s team.

The one season spent in Segunda clearly had no effect on Villarreal as they had no problems reclaiming a top 6 position in La Liga, and it looks as though the Yellow Submarine can again battle for Champions League berths.

The club management did a very good job in the summer transfer window, with former Valencia stars Roberto Soldado and Victor Ruiz among those to have been given a chance to kick-start their career at El Madrigal.

The Yellow Submarine have been thoroughly impressive of late, defeating Rayo Vallecano, Real Madrid and Real Sociedad to come within one point of fourth-placed Celta Vigo and they are now 1.87 (20/23) to see off Valencia as well.

The good news is that both Mario Gaspar and Leo Baptistao have resumed training and they should be in contention for starting places.

However, Jaume Costa remains a major doubt, whereas Adrian Lopez, Daniele Bonera and Eric Baily continue to miss out.

Wealthy businessman Peter Lim may have been welcomed as a saviour at Mestalla, but it looks as though the task of ensuring Valencia remain a force to be reckoned with in Spain and Europe could prove more difficult than expected.

Los Che have experienced all sorts of problems this season, as their top 4 bid could end midway through the season, with Nuno Espirito Santo already paying the price for disappointing results.

But, it was Gary Neville’s arrival at Mestalla that was the biggest surprise, and nobody was surprised to see the inexperienced coach struggle at the start of his career in Spain.

Under his guidance, los Che recorded three straight draws in La Liga, while losing to Lyon in CL and beating Barakaldo in Copa del Rey.

But, seeing they are already nine points behind top 4 positions, Valencia will have to start winning soon, although red-hot Villarreal are probably not the side they would want to face in the final fixture of the year.

To make matters worse, Zakaria Bakkali, Jose Gaya, Sofiane Feghouli, Shkodran Mustafi and Aymen Abdennour are all out injured, but Enzo Perez should return to the side.