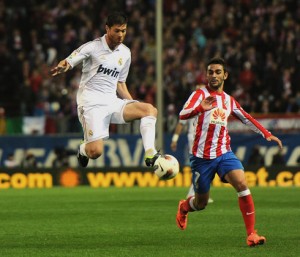 Many were quick to dub former Valencia defender Miroslav Djukic a miracle-worker after he helped Pucela gain promotion to La Liga despite the huge financial problems at the club.

It appears that those will have to find a new way to describe the Real Valladolid coach following team’s impressive showings in Spain’s elite division.

Rather than fighting for their lives as everyone expected, Pucela climbed to seventh place in the standings with back to back wins over Granada and Valencia.

Those results certainly give them reason for optimism ahead of the clash with Real Madrid, so maybe there is some value in odds of 1.91 (10/11) offered at Stan James on Real Valladolid to score.

Jesus Rueda is out with a knee injury, but Miroslav Djukic has no other selection worries at the moment.

Every match in La Liga is a must-win game for Real Madrid if los Blancos plan to catch Barcelona at the top of the standings, although many believe an 11-point advantage is just too much.

Nonetheless, being five points behind their other rivals Atletico Madrid, los Merengues need to at least climb to the second place in the overall standings or risk the wrath of their fans.

The 2-0 victory over Atletico Madrid did help the players restore some of the lost confidence, while Jose Mourinho was able to rest most of his starters in the 4-1 Champions League win over Ajax.

With all star players now set to return, it is no wonder Real Madrid are just 1.29 (2/7) with Paddy Power to triumph at Jose Zorrilla.

Given that Cristiano Ronaldo is just 1.50 (1/2) with SkyBet to score at anytime, maybe there is more value in backing Karim Benzema at 1.91 (10/11) offered at William Hill.

Michael Essien is back in contention after recovering from injury, but Fabio Coentrao is a major doubt. Gonzalo Higuain and Marcelo remain long-term casualties.