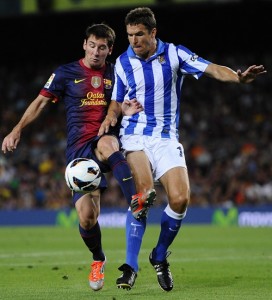 Out-of-form Real Sociedad face an extremely difficult task in an attempt to overturn a two-goal deficit from the first leg, especially since reigning La Liga champions Barcelona arrive at Anoeta.

La Real were somewhat unfortunate to suffer a 2-0 defeat in the first leg, although they did well not to concede more after having Inigo Martinez sent off just before the half-time break.

Jagoba Arrasate’s charges go into the return match low on spirits having failed to beat Levante at home, which was their third successive poor result.

Following back to back defeats to Atletico Madrid and Barcelona, Real Sociedad failed to score in their third consecutive game, and they are 2.50 (3/2) to continue the trend against the Catalans.

It is perfectly clear the team have suffered a dip in form following some excellent displays in December and January, but they are not giving up on the place in the Copa del Rey final.

Nevertheless, odds of 32.00 (31/1) offered at Betfair on Real Sociedad to qualify are enough to suggest the size of the task in front of them.

Barcelona have clearly not been playing to their potential this season, but the Catalans, nonetheless, remain in contention for three major trophies.

La Liga title chase looks set to go to the wire after Gerardo Martino’s side suffered an unexpected home defeat to Valencia, although the players produced a perfect response by coming from behind to defeat Sevilla at the weekend.

Lionel Messi proved the doubters wrong by scoring a brace and setting up another goal in the 4-1 triumph and he is now 3.50 (5/2) to score the first goal at Anoeta.

And with Gerardo Martino expected to field a strong side in the return leg, Barca are priced at 1.44 (4/9) to win this match as well.

Brazilian forward Neymar is close to resuming full training, but he is unlikely to be risked in midweek’s game against Real Sociedad.

Carles Puyol is doubtful with a back problem, whereas Javier Mascherano and Jordi Alba return from La Liga suspension.