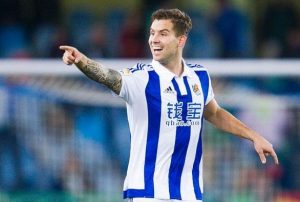 There has been a piece of transfer-related news that has gone a bit under the radar amidst Barcelona’s entire Neymar transfer saga.

With the Brazilian superstar already in Paris, the Catalan giants are preparing to launch an assault to find a proper replacement upfront, but new boss Ernesto Valverde is not neglecting his other transfer demands as he looks to add more strength to his defensive line at Camp Nou.

As reported by the Basque publication Noticias De Gipuzkoa, Ernesto Valverde has personally urged on Barcelona chiefs to focus their attention towards grabbing the Real Sociedad stalwart Inigo Martinez.

The 26-year-old defender has racked up impressive 193 La Liga appearances for the Basque side since his 2011 debut. Having gone through Real Sociedad’s youth academy, Inigo Martinez has gone to establish himself as somewhat of a club icon.

Martinez is under contract with Real Sociedad until 2021, but Barcelona appear to be more than willing and able to meet his €30 million release clause in order to bring his to Camp Nou.

Inigo Martinez’s attainable and affordable release clause has generated plenty of interest from around the continent, with Manchester City believed to be huge admirers of the defender’s talents.

Pep Guardiola has reportedly kept a close eye on Martinez both during his Barcelona and Bayern Munich spells, whereas plenty of other European sides are believed to be monitoring the Spanish international.

Barcelona, however, are believed to be leading the pack as they look to reinforce their back line. With Jeremy Mathieu already out of the club and Thomas Vermaelen edging closer to the exit door, the Catalans only have Gerard Pique, Samuel Umtiti and Brazilian Marlon Santos competing for a place in the team.

And with Javier Mascherano tipped to be slotted back into his favoured midfield position, a move for Inigo Martinez seems even more likely to happen.

Barcelona are at 11/10 betting odds to lift the La Liga title this year.