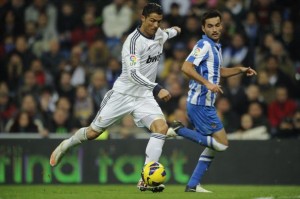 Having crashed out of Copa del Rey, Real Madrid need to try and cement the first place in the La Liga standings ahead of the season finale.

Looking to spoil their plans will be high-flying Real Sociedad, who were also eliminated from the Spanish Cup, but they are very much in the race for a top 4 finish in the league.

Just a couple of weeks back, Real Madrid appeared to be in with a decent shot at winning the treble of major titles, but things have changed a great deal since.

Los Blancos were unexpectedly eliminated from Copa del Rey at the hands of Celta Vigo, failing to win either of the quarter-final legs, and only avoiding double defeat thanks to a late goal.

The 2-1 league defeat to Sevilla saw los Rojiblancos and Barcelona close the gap behind them to one and two points respectively, and even though Real Madrid still have a game in hand, they are no longer overwhelming favourites for the league trophy.

Another difficult clash is on the horizon as los Blancos play host to overachieving Real Sociedad side, but they are available at 1.28 (7/25) to claim maximum points.

Zinedine Zidane doesn’t have such a big squad to choose form as James Rodriguez, Gareth Bale, Pepe and Daniel Carvajal continue to miss out.

Keylor Navas, Lucas Vazquez and Raphael Varane will return to the side, but Marcelo is sidelined as well, meaning that Nacho should start at left-back.

There are no doubts that Real Sociedad have been exceeding expectations this term, but now it’s time for the more difficult part as La Real need to ensure they get the most out of the opportunity that presented itself.

The Anoeta outfit cannot be blamed for the 6-2 aggregate defeat to Barcelona in Copa del Rey, especially since head coach Eusebio Sacristan had fielded his strongest side in both legs.

Said loss could prove a blessing in disguise now that La Real have a unique opportunity to secure the Champions League qualification through league finish.

Exactly midway through the league campaign, Real Sociedad sit level on points with fourth-placed Atletico Madrid, and this is probably the right time to be facing mighty Real Madrid.

Los Blancos are going through a very rough patch and are missing several important footballers, so there may be value in odds of 4.00 (3/1) offered on La Real not to lose.

Full-back Yuri is suspended for the Santiago Bernabeu clash after the club’s appeal was rejected, but Asier Illarramendi returns from ban.