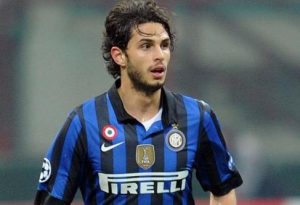 According to reports from the Italian media, the Reds are keen to make a deal with Inter Milan defender Andrea Ranocchia.

Calcio Mercato claims that Serie A giants are ready to sell the Italian international after he fell down the pecking order with new manager Frank de Boer.

The 28-year-old will reportedly be allowed to leave during winter and Anfield side have already renewed interest in the Italian centre-back. Jurgen Klopp is believed to be a huge admirer of Ranocchia’s talents and is ready to add him to the team for the second half of the season.

Liverpool have opened the new season on a high having already displaced the likes of Arsenal, Chelsea and Premier League champions Leicester City early in the campaign. Klopp’s men did however lose to Burnley and German tactician is keen to add fresh blood to the back line.

After the 3-0 Football League Cup third round triumph over Derby County, Liverpool get back to Premier League action against Hull on Saturday. Klopp’s men are 1.75 (3/4) @Coral betting odds to claim a Half Time/Full Time triumph against the Tigers.

The Reds have brought Joel Matip and Ragnar Klavan during summer as direct replacement for Martin Skrtel and Kolo Toure, but seeing that Mamadou Sakho is not in Klopp’s plans anymore, the German tactician is prepared to move for the Italian when transfer window reopens in January.

Rannochia has been limited to just two appearances this season having been restricted to the bench for the majority of the Serie A games.

Former Genoa and Sampdoria defender has never played outside the Italian leagues, but Klopp believes he would be a good fit to his Liverpool side.

The 28-year-old Italy international defender has made 168 appearances for Inter since his arrival in 2011.

Ranocchia is tied down to Inter Milan until 2019.