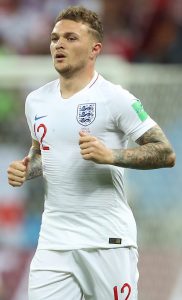 As per Sky in Italy, the recently-crowned Serie A champions have highlighted the Englishman as a potential replacement for full-back Joao Cancelo, who has been linked with a switch to either Manchester City or Manchester United.

Napoli have also been mooted to be interested in Trippier, with boss Carlo Ancelotti admitted that the club are ‘evaluating’ the defender’s future.

Trippier has been with Spurs since joining from Burnley in a bargain transfer worth a reported £3.5million. Since arriving in North London, he has made 114 appearances for the club, scoring twice and providing 24 assists.

In his time with the club, he has also managed to take his international career with England to new levels, having made his debut under Gareth Southgate in June 2017. Trippier was key throughout the 2018 World Cup in Russia for the Three Lions, most notably scoring a stunning freekick in the 2-1 semi-final loss to Croatia.

It seems extremely likely that he is going to depart Tottenham this year though, with Napoli at odds of 4/6 with Betfair to swoop for the defender’s signature. Meanwhile, Juventus can be backed at a price of 11/4.